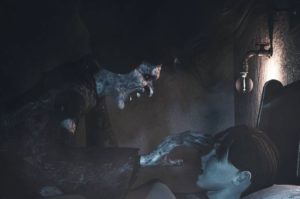 In March 2003 I investigated four sinister cases of ‘Old Hag Syndrome’ across Liverpool. The syndrome has been recognised by psychologists for many years, but no one is sure whether the cause is supernatural or simply the product of a half-awake mind.

Victims wake up in bed to find that they cannot move, even though they can see, hear, feel and smell. They often experience the feeling of a great weight on their chest and sense that there is a sinister or evil presence in the room.

This presence sometimes manifests itself as an old hag with evil-looking eyes, hence the name of this syndrome. A fortnight ago, a 27-year-old man named Tony woke at his home in Kensington at three in the morning and found himself unable to move a muscle.

He panicked, as he struggled to breathe, then he opened his eyes – and saw an old woman with a black shawl leaning over him. She started to cackle, and she started to stroke Tony’s face with what felt like bony fingers.

The face of the night visitor looked very sinister, and the woman muttered something unintelligible. She leaned forward and began to kiss Tony, and a terrible stench filled his nostrils. He tried desperately to regain the power of movement, and he suddenly screamed out and pushed away the eerie figure. The old hag was nowhere to be seen.

Six days after that report, in the leafy neighbourhood of Calderstones, a 45-year-old man living on Booker Avenue named George retired to his bedroom at 10 pm. His wife remained downstairs ironing clothes. She said she’d be coming up to bed in about an hour.

However, at around 11 o’clock that night, George was awakened by someone climbing into the bed. He turned to cuddle his wife and found no one there. George thought perhaps he’d been dreaming, and he laid back to relax.

As he was about to drop off asleep, George felt something heavy pushing down on his chest. He opened his eyes – and found himself paralysed from head to toe. A dark shape was on top of him.

George felt as if the presence was stealing the life out of him, and that if he didn’t fight it he’d die. An unsightly face leaned over his face. It was the face of a very old woman with evil staring eyes.

George could see a flickering golden light in those eyes. The woman put her mouth to George’s mouth and her breath smelt rancid. The putrid breath seemed to fill his head. George had classed himself as an atheist, but that night he called upon God to save him from the evil hag. The wrinkled face grimaced as if in great pain, and then the eyes turned completely white.

The weight was lifted from George, and the hag had vanished into thin air. George felt movement return to his big toe, then the whole of his leg and the rest of his body in turn. He raised himself up and leaned against the bed’s headboard, gasping for breath.

His heart pounded. He looked about, and saw the room was empty. George then ran down the stairs to tell his wife about the ghastly experience. She immediately noticed a strong putrescent odour, and sniffed his mouth.

George then realised the hag had been no dream. He gargled with a mouthwash and brushed his teeth repeatedly until the horrid vestiges of the hag’s kiss had gone.

These are just two of the four cases that have been reported to me. The other two incidents occurred in Aintree and Garston, and both victims gave a carbon copy description of the old hag who terrorised the men in the aforementioned cases.

They also mentioned smelling an unpleasant odour during the ‘assaults’. Until I know more about the old hag phenomenon I will be unable to offer a theory. In the meantime, sleep well, and don’t have nightmares.