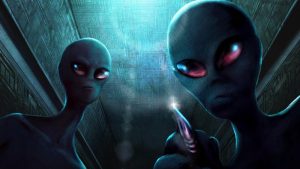 A former CIA employee is not just a ufologist, but a person who is investigating alien abductions. The man warns that extraterrestrials are not friends to us at all, they are evil ruthless creatures.

If a person does not experience negative emotions after the abduction, then he succumbed to the influence of a special program of aliens. As a rule, such personalities begin to tell in a positive way various not quite good things that were inspired by aliens.

For example, according to Sims, often abducted people talk about the “friendly mood” of the “green men”, although they carried out certain surgical operations on them.

For those who have not succumbed to suggestion, humanoids simply erase their memory. A former CIA employee has personally received more than two thousand cases of abduction. But the man is sure that there are actually about a million of them.

According to Derrell, one woman had a scar from the chest to the umbilical cord, but she still does not remember anything about it. And there are many such cases when people woke up with incomprehensible scars.

In total there are 7 types of aliens. Sims personally dealt with grays and reptiles, which are very similar to people. Some species were created on Earth based on human DNA, says Derrel Sims.