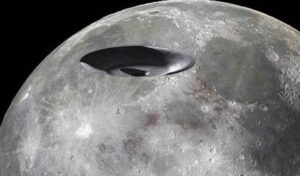 Many conspiracy theorists all around the world strongly believe that aliens are inhabiting secretly on the lunar surface, and they have released several anomalies spotted on the different lunar images released by space agencies like NASA.

Adding heat to the claims made by these alien believers, an amateur astronomer from Serbia, filming the moon, recorded a giant UFO flying over its surface, which can be seen from the shadow cast by this UFO on the surface of the moon.

The video captures a black, unidentified circular object that passes over parts of the moon.

And this is not the first video to show an unidentified flying object near the moon.

Ufologists note that this footage may indeed represent a documented fact of the interaction of a huge UFO and an unknown object on the territory of the Earth’s satellite.