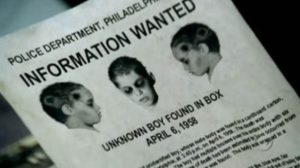 He has no name and no identity. When his tiny body was discovered inside a cardboard box he was known only as “The Boy in the Box,” marked for his cruel death instead of for his short life.

At the time no one would have thought that some of the very same police officers who searched through the crime scene for clues on that cold dreary day in 1957 would be reburying the boy as “America’s Unknown Child” over four decades later.

Discovery of the body

On February 24th, 1957 a college student pulled his car over onto the side of a remote road in Fox Chase – a community in the northern outskirts of Philadelphia.

The man had seen a rabbit cross the road and followed it into a garbage-strewn lot when he saw a suspicious looking furniture box. What he found inside was the body of a young boy – no more than 5 or 6 years old, wrapped in a flannel blanket.

The boy was malnourished and badly bruised – the cause of death due to severe head trauma – though oddly enough, someone appeared to have recently trimmed his nails and cut his hair shortly before or after his death, for he still had remnants of hair on his body.

The greatest mystery of this case is not only that the killer of the boy was never found but that the boy to this day had not been identified. When the investigation began this outcome was far from expected, for the crime scene was not void of clues.

The cardboard box the body was found in once held a bassinet purchased from the local JC Penny store, however, the store had a cash only policy and the purchase of that particular bassinet couldn’t be traced.

Also, the flannel blanket the boy had been wrapped in was one of thousands, and even a man’s cap that they found near the scene never led to its owner. The boy had no fingerprints on file and his footprints were difficult to match because his feet were badly wrinkled from having been immersed in water for a long period of time.

The Philadelphia police circulated thousands of flyers with the boy’s photo and description across the country. Calls from many concerned citizens came in, but the leads led to one dead end after another.

It was unbelievable that this young boy didn’t have a single relative or friend of the family who recognized him. Parents of missing children came to view the body but no one claimed the poor boy.

For years investigators continued the search, many on their own time, with the hope that something would lead to the boy’s identity and the boy’s killer, but as the years passed, the chances of uncovering the mystery diminished.

A decent funeral and burial was arranged in 1998 and the boy’s remains were moved to another cemetery, for the boy was previously buried in a pauper’s graveyard housing criminals and unidentified bodies with only the investigators on the case to carry his tiny casket.

Now over a hundred people attended the ceremony, several of them the same detectives determined to keep the case of the murdered boy alive. The boy was named “America’s Unknown Child” but not without the hope that some day the mystery will be solved.

An investigator by the name of Remington Bristow from the city medical examiner’s office spent 36 years on the case – all the way through retirement and to his death.

He spent hours following leads, often on his own time and expense, and died believing that he knew the killer of the young boy to be a foster family that lived near the place where the body was found.

Bristow even called in a psychic who envisioned a house where a couple had lived with five foster children.

At the time of the discovery they claimed that all five children were accounted for, but Bristow discovered a similar blanket at the house to the one the boy’s body had been wrapped in. Even though this couldn’t be proven, he died believing he had solved the case.

The Vidocq Society – an international group of crime-solving professionals – adopted the case in 1998. Sam Weinstein – the second policeman to arrive at the scene where the boy’s body was discovered – led the society’s Boy in the Box investigation.

He was later joined by Joseph McGillen, a former investigator with the Philadelphia Medical Examiner’s Office and William Kelly who the supervisor of the Philadelphia Police Department Identification Unit during the time of the murder.

The Vidocq Society assisted in obtaining a court order to exhume the boy’s body for DNA testing. Unfortunately the body was too decayed and the test was unsuccessful.

Theory: The woman known as “Martha” or “M”

Another theory was brought forward in February 2002 by a woman identified only as “Martha.” Police considered “Martha”‘s story to be plausible but were troubled by her testimony, as she had a history of mental illness.

“M” claimed that her abusive mother had “purchased” the unknown boy (whose name was Jonathan) from his birth parents in the summer of 1954. Subsequently, the boy was subjected to extreme physical and sexual abuse for two and a half years.

One evening at dinner, the boy vomited up his meal of baked beans and was given a severe beating, with his head slammed against the floor until he was semiconscious. He was given a bath, during which he died.

These details matched information known only to the police, as the coroner had found that the boy’s stomach contained the remains of baked beans and that his fingers were water-wrinkled.

“M”‘s mother cut the boy’s distinctive long hair (accounting for the unprofessional haircut which police noted in their initial investigation) in an effort to conceal his identity.

“M”‘s mother forced “M” to assist her in dumping the boy’s body in the Fox Chase area. “M” said that as they were preparing to remove the boy’s body from the trunk of a car, a passing male motorist pulled alongside to inquire whether they needed help.

“M” was ordered to stand in front of the car’s license plate to shield it from view while the mother convinced the would-be Good Samaritan that there was no problem.

The man eventually drove off. This story corroborated confidential testimony given by a male witness in 1957, who said that the body had been placed in a box previously discarded at the scene.

In spite of the outward plausibility of “M”‘s confession, police were unable to verify her story. Neighbors who had access to “M”‘s house during the stated time period denied that there had been a young boy living there and dismissed “M”‘s claims as “ridiculous.

On March 21, 2016, the National Center for Missing & Exploited Children released a forensic facial reconstruction of the victim and added him into their database.

The Boy in the Box was discarded in a dumpsite, left with no identity – no story to tell – and so many people have adopted his case out of empathy for the boy who suffered a cruel and undeserved death. Forty years have passed yet there still may be someone out there that could step forward.

The Boy in the Box deserves to be remembered for his life, not for his death.

The Real Life Story Of Dracula And His Castle