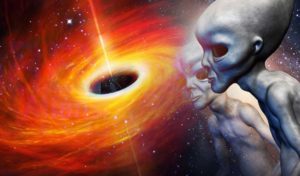 Vyacheslav Dokuchaev, an employee of the Moscow Institute for Nuclear Research, suggested a sensational hypothesis. He proposed that the so-called “black holes” may contain not only different microparticle matter, but entire planets with living organisms. The scientist suggests that they can rotate within the hole on stable orbits, reports pravdareport.com.

According to our most common notions, everything that gets into a black hole is absorbed by it and disappears. Is that so? It turns out that, until recently, even scientists had a very vague idea of ​​what is going on in the depths of black holes.

Calculations made by a physicist Vyacheslav Dokuchaev showed that under certain conditions an object like a rotating charged black hole can have very complex internal structure, within which both small particles, photons and protons, as well as entire macroscopic bodies, and even planets can be rotated around the central singularity.

Singularity is the central area of the black hole, the point where the coordinates of space and time become infinite. What does it look like “in practice”? For example, if a conditional observer falls into a zone of attraction of a black hole, it first passes the event horizon.

This is the way astrophysics call an imaginary boundary in the space-time separating the events that can be affected from the standpoint of infinity (the past), or those one can learn about (the future), and those that cannot be affected or are unknown. This has to do with the assumption that no information can propagate faster than light.

From the point of view of an observer who got into a black hole, the light may be freely distributed both towards her and away from her. However, after crossing the event horizon it can never go beyond its limits. If there is an object under this horizon, it can only move inside the black hole and cannot go back into outer space.

Theoretically, a conditional observer passing the event horizon for some time ceases to exist, but can then get into a very strange place where the radial dimension of the space has the properties of the time. It is possible that the observer will get to the stable orbit (of course, this is not the orbit in the usual sense, it bears little resemblance to conventional planetary orbit).

However, the existence of such orbits was suggested by researchers earlier for those types of supermassive black holes that, in addition to an external event horizon, also have an internal “Cauchy horizon,” beyond which time and space take on their usual properties. However, this phenomenon has not been studied in detail.

According to Dokuchaev, such orbits lie outside the equatorial plane of a rotating black hole, and therefore its enormous gravity no longer affects objects in its limits. Objects move there, revolving around the singularity, just as the planets revolve around the central star, for example, the Sun.

However, unlike ordinary orbits, these are not circular, but have a more complicated shape resembling a wreath of petals. The planet that rotates around such an orbit will receive energy both from the singularity and the photons trapped by the orbit.

There is more to it. According to Dokuchaev, on such planets, in principle, complex chemical substances may be formed and reactions may occur between them, and therefore, there may be appropriate conditions for life. The scientist believes that inside the black hole highly developed civilization can be detected that use the hole as an ideal shelter.

He added, however, that in order to secure a comfortable existence in such conditions, the representatives of this civilization will have to learn to counteract the gravitational forces, as well as adapt to exist in violation of causality because of the space-time distortion.

The hypothesis of Dokuchaev is impossible to verify. Even if there are planets inside black holes with some kind of civilization on them, the event horizon will forever shield them from prying eyes. Disproval of this theory is possible only by proving that black holes do not exist in principle.