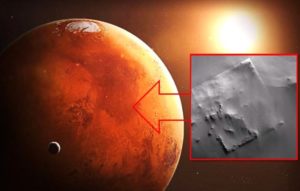 Mars Global Surveyor arrived on Mars on September 11, 1997 and helped make many discoveries, including the sites of ancient rivers and meteor craters.

In the images published by NASA, you can see an object on the surface of Mars, which does not fit the definition of a natural object, its outlines are too geometrically correct and look like the ruins of a huge building.

NASA admitted that they do not have a definitive answer to this riddle. They confirm the presence of the object on the surface of Mars, but they refuse to comment on the assumption that these are the remains of a huge building or fortress. 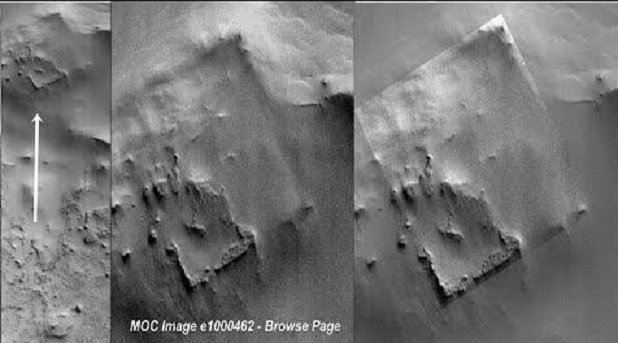 “From all the photos I have seen from Mars Global Surveyor this is probably the most intriguing photo I’ve seen on Mars, looks like a square fort ruins or an ancient city surrounded by huge walls made by a martian ancient civilization”, wrote one researcher.

Mars Global Surveyor completed its primary mission in January 2001 and was in its third extended mission phase when, on 2 November 2006, the spacecraft failed to respond to messages and commands. A faint signal was detected three days later which indicated that it had gone into safe mode.

Attempts to recontact the spacecraft and resolve the problem failed, and NASA officially ended the mission in January 2007.

Not all crop circles are made by people, says researcher