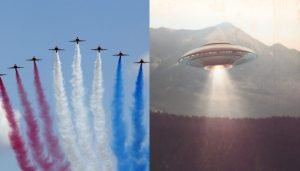 Thousands of people are reported to have gathered in the United Kingdom over the Platinum Jubilee long-weekend to witness the events marking the ceremonial celebration of Queen Elizabeth II’s 70 years on the throne.

During the event, many people from around the world watched the Trooping the Colour parade and the Royal Air Force Aerobatic Team (RAF) or the Red Arrows’ flypast.

In a video, which was uploaded on Reddit, something like an unidentified flying object (UFO) can be seen zooming across the sky, right behind the planes. The video has now been deleted.

Flying in formation, the nine planes of the aerobatics team blasted over Buckingham Palace for the official flypast, creating a line of red, white and blue smoke in their wake.

The impressive sight captivated members of the public both on the scene and those watching at home, but upon closer inspection of the event some viewers think they’ve spotted a tenth flying object in the sky.

We can see a fast moving sphere once the jets make their appearance.

The sphere certainly does not have the characteristics of a drone since it looks like the UFO is surrounded by an energy field.

Commenting on the post, a UFO enthusiast wrote: “Just watched the BigJetTV angle again, this goes WAY too fast to be a drone or balloon in the wind. I’m inclined to say this is a genuine [Unidentified Aerial Phenomena].”

Another user theorised, “…4th dimensional object passing through 3-dimentional space would look like a sphere to 3-dimensional beings.”