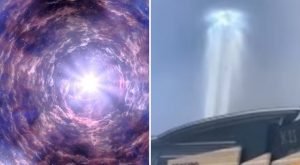 On the morning of September 8, 2021, over the city of Shenyang (China), local residents observed a strange phenomenon. A bright beam of light appeared in the sky, in which something very similar to a staircase was peeped out.

The mysterious phenomenon forced eyewitnesses to take out their mobile phones and start filming. After the publication of the video materials, stormy discussions of this phenomenon began on the network.

Some users are convinced that a portal to a parallel world has opened over the city, while others believe that a beam of light was released by a UFO hovering over the heads of eyewitnesses.

There are those who believe that the Chinese military is testing secret technologies to establish contact between dimensions.

The Chinese authorities, in order to avoid panic among the population, turned to meteorologists, who gave a rational explanation for the unusual phenomenon.

According to experts, this is a common natural phenomenon that arose in a place where the clouds are especially thin and the sun’s rays easily broke through them. As for the stairs in the rays of the sun, experts said, this is a building illuminated from one side.

Some researchers did not agree with the opinion of meteorologists, and continue to believe in the alien origin of this phenomenon.