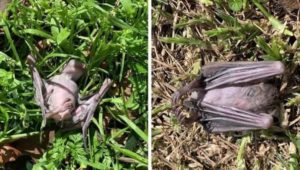 The story began on March 21, when a man named Adi Moskowitz walked around the large city park Gan Leumi Park and stumbled upon a large number of dead bats. To this day, no one can say why the bats died.

Some of the bats had already begun to decompose, while others looked completely fresh. Outwardly, all the bats seemed completely healthy, there were no traces of blood, ulcers on the body, etc. Their pose was as if they were hanging on a branch, and then fell.

Moskowitz decided to publish a post on a social network, attaching several pictures to find out the fate of bats.

Over the next few days, it turned out that this incident was not the only one and that in Israel in some other places people also saw dead bats on the ground.

Many Facebook commentators are convinced that 5G technology is to blame.

Rabbi Avraham Arieh Trugman director of Ohr Chadash Torah Institute believes that natural phenomenon like these connect the end-of-times with creation and act as signposts about man’s role in relation to nature.

“Man is part of nature so Moshiach will necessarily include nature and be manifest in nature,” Rabbi Trugman told Breaking Israel News.

“None of these natural occurrences happen in a vacuum. We think we exist in a sanitized technological reality but we live in a natural world. Man has a huge impact on nature, and this impact has been growing in the last hundred years. If we lose track of our connection with nature, it will come back and bite us.”

I will sweep away man and beast; I will sweep away the birds of the sky And the fish of the sea. I will make the wicked stumble, And I will destroy mankind From the face of the earth —declares Hashem. Zephaniah 1:3

For that, the earth is withered: Everything that dwells on it languishes— Beasts of the field and birds of the sky— Even the fish of the sea perish. Hosea 4:3

“Everything is holistically connected through God. If we see birds falling out of the sky, we should understand that if the environment gets too much out of kilter then the whole world is in danger of falling apart.”, said Rabbi Avraham Arieh Trugman.