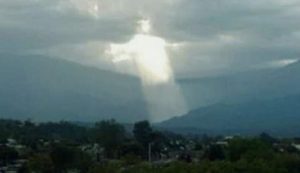 On Tuesday, May 14, residents of the Argentinean city of San Salvador de Jujuy and the surrounding settlements (Jujuy Province) unexpectedly witnessed a truly striking picture.

The weather was cloudy, but at a certain moment the sun suddenly shone through the clouds in the sky, and its light took on an anthropomorphic appearance.

Numerous eyewitnesses immediately recognized in this figure the image of a bearded long-haired man in a cassock, who spread his arms to the side.

The above picture was taken by a local resident Monica Aramayo. When the Argentinean posted the photo on the Internet, the unusual frame instantly became “viral”.

Many Internet users have concluded that we are talking about the image of Jesus Christ. It is alleged that he even had a crown of thorns on his head.

Of course, there were quite a few skeptics who considered that this was a bizarre pareidolic illusion.