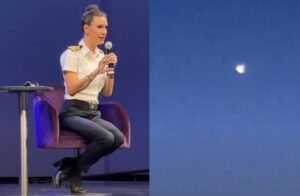 Captain Kate McCue of the Celebrity Edge recalls the day she saw a UFO hover over her ship for a few moments, then dive directly into the ocean.

“I was looking at a beautiful sunset when someone suddenly said to me – “Hey, what is it there?” I looked up into the sky and saw it. It looked like a huge jellyfish”, Kate recalled.

“There was almost no wind at that moment, no more than 5 knots (9 km / h), but this object rotated around its axis and flew around our ship at a speed of about 25 km / h.”

“Then the object began to descend, about 400 meters from the stern of our ship and plunged into the water. We even thought to lower the lifeboat, but there was nothing on the water, no debris, it just sank into the water and disappeared.”

“It was not a drone, all of us who saw it are sure, there was no sound, it flew completely silently.”

Kate McCue (born January 6, 1978) is an American cruise ship captain, currently employed by Celebrity Cruises. She is currently the captain of the Celebrity Edge.

This UFO looks exactly like one of the objects in the still photos taken by Navy fighter pilots.

Kate McCue knows what she saw and she has the evidence on video. She also describes how the object was moving without any sound. This means it has no propulsion system and the object is breaking the rules of physics.

We need to say, that Kate McCue has tremendous courage for publicly sharing her UFO account.