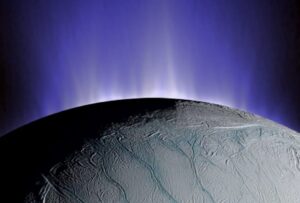 The Cassini-Huygens space probe has overcome the salty jets that erupt on the surface of Saturn’s moon Enceladus. He recorded the presence of compounds that resemble those found in hydrothermal vents located at the bottom of the oceans on our planet, reports Sciencealert.

Astrobiologists also paid attention to the amount of methane in the jets. In their opinion, the rate was too high. Experts have found that science today does not know the processes that could pump out methane in such a huge amount.

A similar phenomenon is observed exclusively on Enceladus and some scientists suggest that it may be of biological origin.

Regis Ferrier said that experts were trying to find out if microbes “consuming” dihydrogen and producing methane can produce such a huge amount of gas.

In order to begin a mission to search for microbes-methanogens on the ocean floor of Enceladus, special equipment is required, which will not be invented for another decade.

That is why the experts used the method of mathematical modeling. Enceladus is located at a great distance from the Sun and is covered with a thick layer of permafrost, under which the ocean is located. It may well contain not only full-fledged currents, but also all the components that are needed for life.

In the event that there really are special hydrothermal springs on Enceladus, then they are able to maintain minimal life. Further studies have shown that microbes may well live on the satellite.

Also, some experts suggest that some unknown process may occur, which is characteristic only for this satellite and has not been recorded even once on our planet.