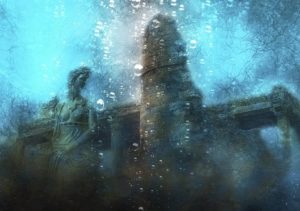 The British search firm Merlin Burrows has said that Atlantis has been found. According to the company, its ruins are close to the Spanish coast. This should, however, be taken with a little skepticism, as many experts have accurately indicated the location of the city, which was not finally confirmed.

The company’s representatives insisted that after analyzing the data from the Landsat 5 and Landsat 8 satellites, which also provide data to Google Earth, and the works of the Greek philosopher, they discovered that the lost city is in the Doñana National Park.

They concluded that the place corresponds to Plato’s colorful descriptions. Bruce Blackburn, CEO of Merlin Burrows, said that searches have been taking place in this area for years and his employees are constantly looking for clues.

Their hard work finally bore fruit when they discovered the supposed remnants of the Atlantis towers and temples. These structures were constructed of concrete from 10 to 12 thousand years ago, according to the employees of the company. It is believed that Atlantis appeared around this time.

Merlin Burrows intends to publish a documentary on what they consider to be evidence of their statements. Blackburn argues that they have been ready from the very beginning for community skepticism. ” Somebody’s gon na say, ” is great. Let’s see that. ” On the contrary, somebody: ” This is just rubbish, “–the CEO said.

At the same time archeologists and other scientists were surprised by this statement. Some have suggested that the ruins discovered are probably part of a different culture, the rest have simply rejected this idea. Other teams said Atlantis is in Bolivia, Turkey, Malta and even Antarctica.

Ufologist found strange structures at the south pole of Mars