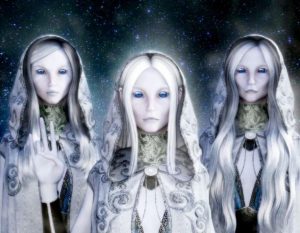 Betty Andreasson recalled under hypnosis that as a teenager she was taken into an alien craft, which entered a body of water and emerged in an underground complex.

Up to this point, she seemed to be traveling in her physical body, since the trip involved what appeared to be great g-forces of the kind produced by ordinary acceleration. In the underground complex, she was told by “Gray” beings that she was going to be taken home to see the One.

Here is the experience that unfolded next, as relived through hypnotic regression:

Fred Max: Does it have hinges?

After thus entering an out-of-body state, she went through the door:

Betty: I went in the door and it’s very bright. I can’t take you any further.

Betty: Because… I can’t take you past this door.

Fred Max: Why are you so happy?

Betty: It’s just, ah, I just can’t tell you about it…. Words cannot explain it. It’s wonderful. It’s for everybody. I just can’t explain this. I understand that everything is one. Everything fits together. It’s beautiful!

After leaving the door of the One, Betty reported encountering mysterious white-robed beings:

“Okay, I’m outside the door and there’s a tall person there. He’s got white hair and he’s got a white nightgown on and he’s motioning me to come there with him. His nightgown is, is glowing and his hair is white and he’s got bluish eyes.”

This person looked like a normal human, in contrast to the small “Gray” beings she had encountered thus far.

In his discussion of this case, Raymond Fowler pointed out that possibly similar beings were reported by Italian Navy personnel during a UFO sighting on the slopes of Mount Etna on July 4, 1978.

In this case the tall white-robed beings were seen by military personnel who were presumably in their physical bodies, in a more or less normal state of consciousness.

In OBEs not connected with UFOs, there are frequent references to beings in white robes. An example would be the cardiac patient’s OBE. It is significant that although this witness thought the white-robed being he saw was Christ, he remarked, “He looked different from any pictures I had seen before.” Evidently, he felt some doubts about this identification. It is also interesting that the man’s encounter with this being was accompanied, as with Betty Andreasson, by a mystical experience involving intimations of universal knowledge.

So here we have three cases in which white-robed beings are described. In one, a person had apparently been physically abducted by ufonauts, then had an OBE involving a mystical experience, and finally met a being of this type.

In another, these beings were seen along with a UFO by military personnel who were walking about in an apparently normal state. In yet another, a being of this type was encountered in an OBE that occurred during a medical emergency and was not connected with UFOs.

[British UFO investigator] Jenny Randles discussed a possibly related case, in which a medically instigated OBE led to a meeting with a tall white-haired being from a UFO. This experience was reported to her byRobert Harland, a professional magician and, alas, a self-confessed phony medium.

Harland told Randles that he went to a dentist in 1964 for major oral surgery. An anesthetic gas was administered, and he had an OBE. From an out-of-body perspective, he saw that the dentist banged his knee, and the dentist later verified this.

Thus far, this was a typical OBE of the kind associated with physical trauma. But then Harland saw a tall being with long white hair drift through the ceiling and explain telepathically that they must go together.

They floated through the roof into a UFO. He was shown around. The UFO’s operation was explained, and he was given a message to convey about a terrible holocaust in which the Earth’s crust would split apart. He was then told he would have to fight his way back to his body.

Indeed, small, ugly creatures tried to prevent his return, but he made it and awoke to see the dentist thumping him and looking very worried. He had nearly died in the chair.

One can always hypothesize that the beings seen in these four cases were simply dreams or hallucinations, although this raises the question of why people would independently have such similar dreams.

If we leave the dream hypothesis in the background and consider that the beings might actually exist, then the question is: Are these beings operating in gross physical bodies or bodies made of some kind of subtle energy?