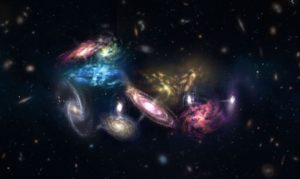 A gamma-ray burst passed through two far-distant galaxies on its way to earth, illuminating them like a cosmic backlight and shedding new light on models of the origin and structure of the universe.

Images from the event stunned some astronomers, because they show that the chemical makeup of these apparently young galaxies is far too mature to fit with the Big Bang theory.

“These galaxies have more heavy elements than have ever been seen in a galaxy so early in the evolution of the Universe. We didn’t expect the Universe to be so mature, so chemically evolved, so early on,” said German researcher Sandra Savaglio, lead author of a related paper slated to appear in Monthly Notices of the Royal Astronomical Society.

Astronomers speculate that after millions of years, hydrogen clouds condensed into stars.

And then eons passed before those stars became mature enough to create the heavier elements, all of which astronomers call “metals.” But stars never could have formed this way, and these new observations fly in the face of that doctrine.

Instead of immature and lightweight galactic elements in these very distant galaxies, “the emerging picture is that the spread in metallicity is large at any redshift [distance],” according to the authors.The researchers analyzed the gamma-ray burst spectral lines, which showed that the galaxies through which the ray traveled contained more metals than the sun.

Distant galaxies appear just as mature as those near to earth, as though there was no relative time difference between the galaxies’ formation. For example, very distant spiral galaxies-where stars are arranged in great, winding arms-appear to have undergone the same amount of spiral arm winding as closer ones.

This is consistent with the idea that astronomical time runs, or used to run, at very different rates than earth time. It also matches the proposed idea that distant starlight takes no time to travel to earth.

Astronomers routinely find mature-looking galaxies at great distances, and these galaxies defy the Big Bang’s story of how nature might have constructed them, as well as when they were formed.

Why do these galaxies have such mature makeups? The Big Bang could not have produced stars or galaxies, but would instead have produced evenly scattered material.

How Long Will The Earth Live?