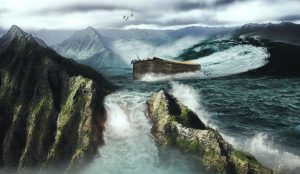 Christian scientists from Turkey and the United States are confident that they have managed to find an object that may well turn out to be the remains of Noah’s ark.

The study used 3D scanning to detect a rock formation on Mount Tendurek that resembled a ship. Moreover, this object is fully consistent with the description contained in the Bible, reports express.co.uk.

The scan was performed by an American company based in Oregon. Geologists are confident that they have found the most common stone, but the results of the study demonstrate that it may contain some kind of structure that a man made with his own hands.

Under the surface of the formation, a lot of parallel lines, as well as right angles, are quite clearly visible. Experts point out that nothing like this can be found in a natural geological formation.

Andrew Jones noted the fact that the discovered rock formation has exactly the same proportions as indicated in the Bible.

The boat formation is around 150 metres, or 300 cubits in Biblical terms.

Andrew Jones, long-time Ark hunter who led the research team, told Sun Online: “This is not what you would expect to see if this site is just a solid block of rock or an accumulation of random debris from a mudflow.

“But these results are what you would expect to see if this is a man-made boat matching the Biblical requirements of Noah’s Ark.”

Modern scholars do not agree that there was once a worldwide flood, which is very well described in the pages of the Bible.

For most geologists and historians, the modern understanding of the fossil record, human history and age of the Earth is proof of the impossibility of the biblical flood.

At the bottom of the sea discovered “technology from the future”