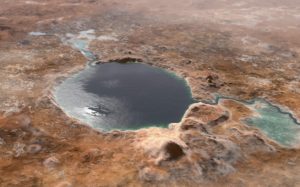 Data from the first 208 Martian days of Perseverance provided a wealth of information about Lake Jezero Crater, where the NASA rover landed in February 2021.

It was believed that the crater was an ancient lake, and recent studies have confirmed this. In addition, analysis shows that organic molecules were abundant in these waters.

Organic molecules are not proof of life on the Red Planet, but their discovery raises the possibility that ancient Mars most likely had life. The only question is what kind of life was and in what form.

Recently, a team working with the Perseverance toolkit discovered igneous rocks at the bottom of Lake Jezero Crater. They formed from magma, either associated with volcanism or asteroid impacts . And these rocks have all the signs of repeated alteration by water.

Dr. Joseph Razzell Hollis of the Natural History Museum in London and study co-author Dr. Eva Scheller used data from the SHERLOC instrument to analyze rocks in Lake Jezero Crater. The instrument was able to detect the fluorescence of certain organic compounds in olivine-rich rocks.

The sample tubes will be collected and brought back to Earth by the Mars Sample Return mission so they can be studied in detail. Working on Earth will provide a better understanding of the origin of molecules and whether they could be evidence of life.

The discovery of organic molecules at the bottom of the Lake crater , and in particular in igneous rocks, is also interesting for another reason.

Curiosity has found similar compounds in sedimentary rocks at Gale Crater. The discovery of organic materials in two completely different environments on Mars suggests that these organic molecules were in common.

The Perseverance team has been studying the delta of a river that is believed to have once filled Lake Lake with water over the past few months.

Researchers believe that this is an important area for discovering organic material. Considering how rich the crater is in these compounds, the current work could be even more groundbreaking.

An article led by Scheller and Hollis is published in Science.