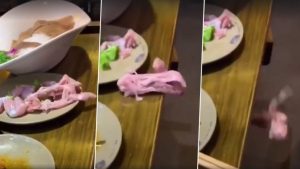 The baffling video has appeared showing a raw piece of meat crawling off a restaurant plate and on to the floor.

Uploaded by Rie Phillips on Facebook two weeks ago, the video shows a piece of raw chicken that seems to take on its own mind as it moves and gyrates in a rather unsettling way.

As the meat jumps off the tray and falls off the table side, a lady can be heard screaming.

Where the footage was recorded is uncertain, but it was assumed to be in a restaurant serving Chinese, Japanese or Korean dishes.

The video has allegedly been able to rack up over four million views since it appeared online and has left users of social media scratching their heads.

One theory indicates that the meat moves because the ends of the nerves are still active, while another indicates the option that the whole thing is a hoax and that a string pulls the meat.

Whatever the case, surely the footage is weird.

Scientists have learned to read your thoughts without touching you

Researcher discovered a strange object about 3,000 miles long over the Earth