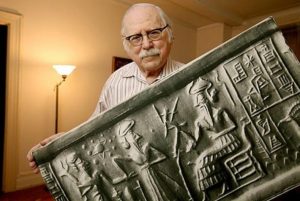 The distant past is shrouded in mystery. What paranormal secrets lie hidden at the dawn of time – gods, mankind’s development, perhaps even extraterrestrial activity? Zecharia Sitchin combined all three in his proposed explanation for human origins – an explanation supported by ancient Sumerian myths and writings.

Zecharia Sitchin was born in Azerbaijan, was raised in Palestine, received an economics degree from the University of London, was an editor and journalist in Israel, and finally moved to New York, where he worked as an executive for a shipping company.

His cosmopolitan background gave him a wider mindset and more accepting views on many things than those who had never traveled far. In addition to his work, his interests varied greatly; he developed an interest in history after teaching himself Sumerian cuneiform and visiting several archaeological sites.

From his studies of Sumerian myths and cuneiform, he developed startling and original ideas on humanity’s origins, ideas which he shared in his book “The 12th Planet” and which he further developed in sequels.

Sitchin’s hypotheses relied on a basis of extraterrestial intervention to significantly affect ancient human history. Sitchin based his ideas on Babylonian cosmology and creation myths in which a god triumphed over a goddess to create the world; gods who had followed the goddess were forced to labor for the rest, until the god who had triumphed killed the goddess’ husband and used his blood to create mankind to do the work for the gods.

Sitchin started with ancient Mesopotamian records which indicated knowledge of a planet beyond Neptune that follows a long, elliptical orbit, only reaching the inner solar system every 3600 years.

By combining his knowledge of Babylonian cosmology and creation myths, Sitchin surmised that the creation myths arose out of that planet, which collided with a planet that was once located between Mars and Jupiter (symbolized by the conflict between the god and goddess); this collision formed the Earth, the asteroid belt, and comets.

However, Sitchin stated that there was much more at stake than simple origin myths. He claimed that the planet beyond Neptune was home to an advanced extra-terrestrial race, referenced in Sumerian myth as the Anunnaki.

Sitchin estimates that the Anunnaki first arrived on Earth approximately 450,000 years ago, as a colonial expedition that was looking for minerals and gold, which they mined in Africa. However, they were dissatisfied over their working conditions, and soon mutinied.

According to Sitchin’s interpretation of Sumerian mythology, this is what led to humanity’s creation. When the Anunnaki became dissatisfied with their working conditions, they genetically engineered the first humans out of a cross of Homo erectus genes and extraterrestrial genes.

The result, Homo sapiens, worked as slaves in the gold mines, and revered the Anunnaki as their gods and creators. As humanity expanded and civilization began to arise in Sumer (in what is now modern-day Iraq), it was under the guidance of these “gods.” The rule of monarchy was instituted to provide intermediaries between humanity and the “gods” – the start of the “divine right of kings” doctrine.

It is unknown what exactly led to the city’s fall; ancient records describe it only as an “evil wind.” Sitchin hypothesized that this “evil wind” was in fact nuclear fallout as a result of war between Anunnaki factions.

However, recent developments have led to greater lexicons which are more widely available; based on such texts, others have claimed that there are inaccuracies in Sitcin’s interpretations.

Critics have also claimed that he takes quotes out of context, or truncates quotes in order to support his views and interpretations. “Evidence is presented selectively and contradictory evidence is ignored,” stated Professor Ronald Fritze, author of a book on pseudo-science, history, and religion.

In addition to challenging his interpretations, others have questioned Sitchin’s knowledge of the history of the Sumerian language; for example, Sitchin stated that all ancient languages stem from Sumerian.

In fact, according to Roger Wescott, Professor of Anthropology and Linguistics, Sumerian is known as a “language-isolate” – no clear relation to any known language or language-family. Thus, as an isolated language, there was no way ancient or modern languages could derive from it.

Sitchin’s interpretations of ancient Sumerian cosmology have also been met with skepticism. Sitchin interprets the ancient Sumerian texts to read that the civilization at the time had knowledge of twelve “planets” – the eight we are familiar with, plus the Sun and Moon, Pluto, and the last one being the planet outside of Neptune which enters the solar system on an elliptical orbit (the planet that Sitchin hypothesized was the origin of the extraterrestrials who created humanity).

However, others who have studied Sumerian texts, seals, and calendars, believe that the Sumerians knew of only five planets – thus precluding any knowledge of the planet which forms the basis for Sitchin’s hypotheses.

Sitchin’s interpretation of Sumerian mythology as based on a planetary collision, however, is somewhat more accepted. This “planetary collision” theory resembles a theory by modern astronomers, a theory in which the Moon was created due to a massive collision of a body with the Earth.

However, modern astronomical theories differ with Sitchin’s theories with regard to both details and timing; and astronomers contemplating the existence of the “Twelfth Planet” that Sitchin postulates existed, have come up with several reasons they believe its existence was unlikely.

Critics have stated that a planet existing on such an orbit, spending the majority of its time in deep space, would be unlikely to form an atmosphere conducive to the creation of human-like extraterrestrials. In addition to the problem of lack of light due to being in deep space, the planet would not have created a thick atmosphere to support life.

Although there are many objections and criticisms to Sitchin’s theories, his ideas retain a seductive allure. It is impossible to know what really happened at the dawn of time, and Sitchin’s hard work has revealed a possibility that may be supported by historical records.

Until more definite methods of proving or disproving his theories are developed, his ideas remain a tantalizing possibility that extraterrestrial life does exist and has interacted with humanity.