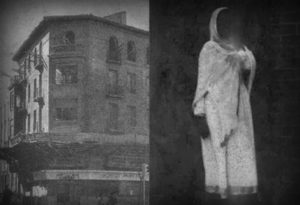 In the 1930’s the Palazon family, residing in an apartment complex on the “Gascon Gotor” street, Aragon, Spain, encountered a frightening ordeal when they started to hear maniacal laughter and voice coming from inside their home.

The family did not know what or who was causing this. The poltergeist phenomenon quickly turned its attention to the young maid, Pascuala Alcocer. She had reported that the voice was tormenting her and that it came from the wood stove.

As the news of this poltergeist spread, thousands, of people started to visit the building. The spectators all came interested in hearing the so-called “duende of Zaragoza”. The word spread so fast and so wildly that the London Times had made a report on the case.

Taking it upon themselves to “put an end to the circus”, local police and judges personally investigated the home and brought with them a few psychiatrists to analyze Pascuala Alcocer, informally putting the blame on her from the beginning.

While investigating, the officials found more and more evidence to prove that this was not a hoax. The entity was reported to not only speak, but also to be able to see what was going on around the home. It would accurately state the number of people that were in a room at a time.

With no real answers to the strange events, the judges, police and psychiatrists assumed that Pascuala was using ventriloquism to create this hoax. They were in extreme pressure to come up with a solution to this hysteria, blaming the girl was the best way they could think of quieting the situation.

All the tenants in the building were evacuated, and the whole block was quarantined and Pascuala was removed from the premise. An architect was called to examine the whole building, corner to corner.

Even the army was called in to investigate the case; all communications (radio/telephone) were cut from the outside. The maniacal voice continued emanating from the wood stove, but now with a different attitude. It started yelling and insulting everyone in the room, telling them that it would kill them all!

When the architect called a skilled mason in order to take some measurements of the kitchen, something else happened. The voice showed them it had knowledge of the building.

While the man was measuring a certain part of the kitchen the voice said: “Don’t worry, it measures 75 centimeters.” Of course, when he measured, it was exactly 75 centimeters. The mason was so scared he left the building never to come back leaving his tools behind.

Arturo Grijalba was only a kid when the entity spoke to him. He was the building owner’s son and the only remaining witness alive to this case. While the investigation was taking place, he had wondered into the kitchen to take a look at the kitchen for himself.

When Arturo turned to his dad and said: “Let’s go dad, this thing is crazy” a voice replied: “Not crazy little one.” in a guttural response everyone in the room heard it and were visibly shaken.

After two months of insults and threats, the maniacal voice suddenly stopped. Like in all poltergeist cases, it manifested quickly and without warning and vanished the same way.

Pascuala was stigmatized with being the hoaxer, the police blamed the girl and her ability to “throw her voice”, even though skeptics had retorted with the argument that Pascuala was not even near the neighborhood when these voices occurred during some of the investigations, the police and judges closed the case blaming Pascuala.

She lived a very reclusive life after this whole ordeal had ended. Never fully recovering from the blame what was put on her, she refused to socialize with the people of the city. In old age, she gave an interview about this incident. When asked where the voice was coming from, Pascuala answered: “From the wall.”

Today, the building no longer stands it was demolished and in its place, stands a modern building with many residents, none of these have reported any strange occurrences.