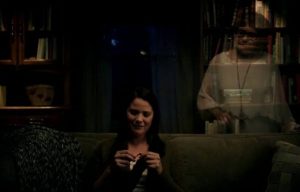 My grandmother died in her home at age 78. Up until a few days before her death, she had been in fine health for a woman her age. Then she started complaining of stomach pain, what she called “a burning feeling”. She had visited a doctor, who gave her something for her stomach and had scheduled a follow-up visit for the following Monday morning. (Her visit was on a Friday.)

When Monday morning came around, as she got dressed to go to the doctor, she suddenly announced, “I’m having trouble breathing.” My grandfather called 911, but before the ambulance got there she laid back on the bed, waving her hand slowly at my grandfather (as if to wave ‘goodbye’), and went limp.

The ambulance arrived moments later, but it was too late.

She died of heart failure.

Months later, she came to me in a dream. I dreamed I was laying in bed, when suddenly, in a cork-screw like clockwise motion, my grandmother came down head first from the ceiling.

Only the top half of her body had come through, but because of the disproportional way dreams are sometimes, as she looked down at me her nose was mere inches from mine.

She wore a blue flower-print house dress, one I hadn’t seen in years but immediately recognized as one she had favored for many years when I was a child.

She was aglow with an inner light. She softly said, “Remember that I love you, and that everything is going to work out.” And with that, she spun counter clockwise back up into the ceiling.

I awoke and thought to myself, “Whoa”.

A few weeks after that, I was settling down for a night at my grandfather’s house. Yes, the same house my grandmother had died in.

Staying in the guest room, the night began to drag on as I had trouble falling asleep. As minutes stretched into hours I listened to the radio. After awhile, the radio clicked off (it was on a timer). Soon the quiet night sounds were all one could hear.

I began to relax.

Then, I heard my grandfather (whose bedroom was directly across the hall, to my left) get out of bed and shuffle off into the bathroom. (It is attached to his master bedroom.) At that moment, something both wondrous and scary happened.

Looking at the wall directly in front of me, as my head was slightly elevated by two pillows under it, I saw my grandma walk into the room.

She came through the wall and the bookshelves mounted on the wall, and continued to the left side of the bed – the bed I was laying in! Again, she was aglow from within, although now I could see the room directly behind her by looking through her.

She wore the same blue flower-print dress as in the dream.

Standing next to the bed, she looked down at me and smiled.

At the same time, she laid her hands on mine (mine being folded across my chest at the time). Then she bent over and kissed me on the cheek. No, it didn’t feel it but as she started downward I saw her lips pucker (in a pecking kiss way) and by looking down I could see the blurry glow stop just at my cheek.

Then, she stood back up and smiled again.

At that moment, I heard the toilet flush in my grandfather’s bathroom. Evidently, he had finished his business. And the weird thing is, my grandma heard it too.

As the toilet started to flush, she turned and looked directly into my grandfather’s bedroom. She then looked back at me, turned back towards the wall she had entered from and walked away.

As I again heard the shuffle of my grandfather’s feet from across the hall, my ghostly grandma continued on her way and disappeared back through the wall whence she came.

I snapped out of bed, flung the lights on, and spent much of those early morning hours telling my grandfather what I saw and just wondering. Like I said before, it was both wondrous and a little spooky.

My grandfather, at one point, commented, “She never visits me.” But it doesn’t end there.

A few days later, grandma came to me in a dream again.

I dreamt I was laying in the guest room bed at my grandfather’s house. I dreamt I looked over into his bedroom and saw his lights were on.

He was laying on the right side of his bed, asleep.

Sitting next to him, on the left side of the bed and fully awake, was my grandma. “Oh no,” I thought to my dream self, “not again.” I looked down for a second, then looked across the hallway again.

Now my grandfather was asleep on the left side of his bed and, you guessed it, my grandma was sitting on the right side still looking at me.

“Maybe you should come here,” I replied. “Now, now…

You’re not afraid of your ole Grandma, are you?” With that, she floated towards me.

I noticed the end of the dress ended in a bit of blue mist, there were no legs per se. Not like in the real visit days earlier, where she looked complete (though a bit translucent). Stopping at the doorway of the guest bedroom, she said, “I want you to tell your grandpa something for me.

I want you to tell him I visit him all the time, he just doesn’t remember it like you do.” With that I awoke.

When I told my grandfather the next day, he got misty eyed. Then, he smiled.