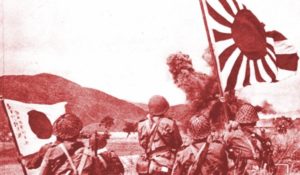 The atrocities committed by the Japanese Military during WWII are well-known. Torture and the killing of POWs was commonplace and violated all rules of modern warfare.

One story stands out however as one of the most barbaric and inhuman acts of the biggest war in history. It began on the morning of September 2, 1944, as American pilots prepared for the days mission. The target of the American bombers was the island of Chichi Jima located about 700 miles south of Tokyo.

The mission was launched but as U.S. bombers approached the target, a radio transmitter, they were met by massive anti-aircraft gunfire and 2 bombers were lost. 9 crewmen managed to bail out of their burning planes, 8 were captured almost immediately by the Japanese.

All 8 American POWs were tortured and eventually killed by beheading or were bayoneted. But what happened after the killings is the truly bizarre part of the story. It seems that some of the Japanese Officers had developed a taste for human flesh, especially liver cooked with soy sauce.

The true purpose of cannibalism was for increasing the troop morale as well as terrorizing the prisoners. In August 1944and February/March 1945 in what came to be known later as the “Ogasawara Incident”, Tachibana, known to his staff as a sadistic, alcoholic commander, issued an order that all American prisoners of war (downed aviators) be killed.

Two prisoners were beheaded in a public ceremony and per an account in Time Magazine, their livers were immediately cut from their bodies and served as sukiyaki.

It was not disputed that eight prisoners of war were executed, and some of the bodies were butchered by the division’s medical orderlies and portions were eaten by the senior staff of the Japanese garrison.

Following the end of WWII war crimes trials were held on the island of Guam. Major Sueo Matoba, Captain Shizuo Yoshii and General Yoshio Tachibana were all found guilty for their role in the murder and cannibalization of the downed American airmen and executed.

The one American flyer that was not captured by the Japanese on September 2, 1944, was a 20-year-old Navy Lieutenant named George H. W. Bush. Bush was rescued by the American submarine USS Finback and went on to become the 41st President of the United States.