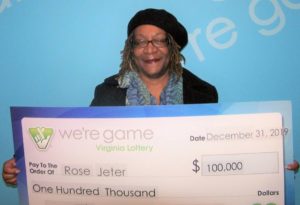 A woman from Virginia won a $100,000 jackpot from the state lottery’s Cash 5 drawing said her winning numbers came to her in a dream, reports UPI.com

Rose Jeter of Petersburg told Virginia Lottery officials that numbers 7-12-14-21-27 came to her in a dream a few years ago, and those were the numbers she picked for the ticket she bought from Mobile Express in Petersburg for Cash 5 lottery.

As the woman herself admitted, she had a prophetic dream a relatively long time ago, but at first she did not believe all this and even tried to forget the numbers.

“For some reason, they did not go out of my head”, told Rose.

Lottery officials said the numbers beat odds of 1 in 278,256 to bring Jeter the jackpot.