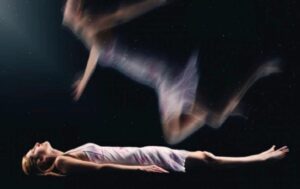 A woman who died and was brought back to life has revealed that she ‘can’t wait to go back to Heaven’.

Betty Eadie, 78, said that she died for a brief time when she was having a hysterectomy operation, and she loved the afterlife so much that she can’t wait to go back.

She even claims to have met Jesus himself.

She told Inside Edition: “I was in the recovery room and suddenly felt every drop of blood had drained from my body and then this sensation of my spirit coming out of body at tremendous speed.

The 78-year-old explained that she then met ‘three really ancient men’ who told her that she was dead.

She told them she wanted to see her family and they ‘flew’ her out the window.

Betty said: “My husband was sitting in the armchair and I stood next to him, I was concerned because he didn’t know I had died, nor had my children, and I was worried for all of them.

“But then I was given a glimpse into their futures and saw they’d all lead good lives.”

Eadie said that she was then taken down a dark tunnel, and at the end of it, she met Jesus Christ himself.

“It was Jesus Christ,” she said. “He hugged me and said, it’s not yet your time.

“Then three women – angels – appeared and Jesus told them, show her everything she needs to know, and I was taken to the most beautiful garden I’d ever seen, like nothing I’d ever seen on Earth.

“The angels then took me around every planet and then Jesus told me I had to go back to Earth but I didn’t want to.

“Then the most beautiful man I’ve ever seen appeared and it was God and he told me I had to go back and I saw my body and went back into it.”

Betty explained that Jesus told her that if she returned to the Earth to spread word of the afterlife, she would be able to return to exactly the same place.

As reported by The Sun, Dr Jeffrey Long, the founder of the Near-Death Experience Research Foundation, said that many people who have died and been brought back have had similar experiences.

He said: “A common theme for anyone who dies for a short time is the shining light and out of body experience.

“Many tell of meeting up with relatives and even pets who have died.

“Yet all of this is impossible because when you die you your brain dies, so this is difficult to explain.”