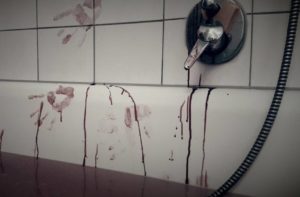 The homeowner @lexyraye posted a video of the bizarre phenomenon in hopes of getting some answers. After living in the home for 20 years, she claimed, she had never seen anything like this.

The night before, her cabinets had started “to bleed”, reports Yahoo! News.

At each bottom corner of the bathroom cabinet, a stream of “blood” appeared to drip down, pooling on the sink’s ledge. She opened the cabinet up and looked inside but couldn’t find anything that would have caused it. In fact, it looked like the liquid was coming from outside of the cabinet.

“The wall is definitely bleeding. This is straight out of a horror movie,” she said. “Can anyone help me figure out why my wall is bleeding or am I being possessed?”

The video racked up 4.7 million views, with many offering their advice.

“This happened to me! There’s little adhesive bits at the bottom of the cabinet and they’re melting,” someone suggested.

“I’ve seen this before actually, all you have to do is throw away the whole house,” another joked.

“Give it a couple years and a push up bra and it will blossom into a beautiful full length mirror,” a user wrote.

“You have a leak behind the medicine cabinet maybe. That’s rusty water,” a TikToker added.

“This happened to us. The previous owners were heavy smokers. The new landlord painted but tar would seep through,” a person commented.