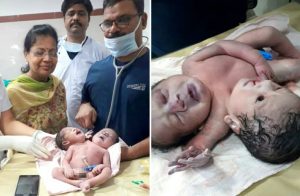 Before birth, the woman visited doctors and did an ultrasound, but the doctors did not see any abnormalities in the pictures and told her that the twins would be born.

Therefore, Babita and her husband Jaswant were shocked by the appearance of the child.

This type of Siamese twins is very rare. The child has two heads on one body and all internal organs are common, including one heart. This newborn, in addition, has a unique feature, one of three hands grows between his heads.

One of the heads also has a cleft lip defect, and on one of the hands there is a double palm. 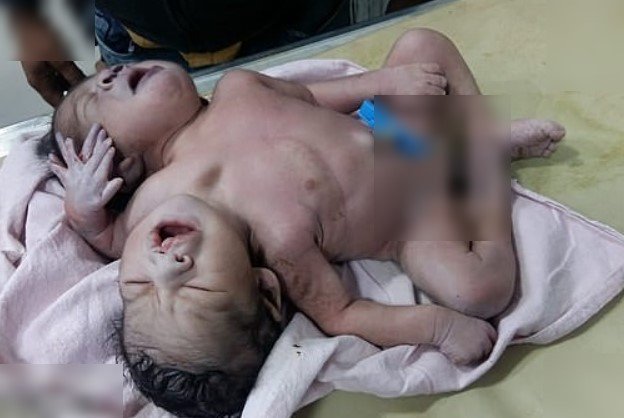 The couple married 18 months ago and this baby was their firstborn. When the mother showed her baby, he was covered with a towel and only 2 heads were visible, so the woman was sure that doctors showed her two children. When she took off her towel, she screamed in shock, and then fainted.

“We wanted a healthy, normal child, but God wanted to punish us this way. I don’t know why,” Babita cries.

In medicine, this type of Siamese twins is called tribrachius parapagus and the chances of their survival are very low. The vast majority of them die soon after birth and only a few survive to at least 6 years. Such babies are not subject to separation.

This baby is now in the hospital under the supervision of doctors and while his condition is satisfactory.