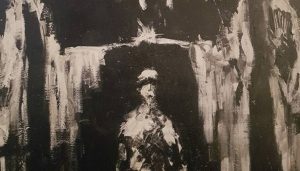 After watching a piece called ‘ Sinister ‘ at an exhibition of haunted objects, Lyn Cinderey began to feel unwell.

“As soon as I saw the painting that they call ‘Sinister’ that was it,” woman recalled. “I felt so ill that I was sick to my stomach. I had to go and tell someone that I did not feel right. It was so strange.”

“The next thing I know is that I have collapsed and I am looking up at a crowd around me.”

The painting itself is mysteriously enveloped. In the 2018 horror movie Finders Keepers, it was originally commissioned for use, but the crew and director took such an intense dislike that they reportedly refused to use it.

It has since become associated with accounts of people feeling unwell when viewing it and there have even been stories of it moving from one side of a room to another when no one looks.

“It was interesting to see what happened that night,” said Haunted Objects Museum owner Lee Steer.

“I have to report what happens around the picture and add to the list of happenings.”

“It was scary at the time because someone collapsed during a Facebook live broadcast.”