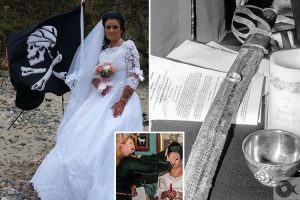 Amanda Teague asserts her ex was 300-year-old energy vampire who was trying to kill her.

Recently, the notable story was featured on the UK TV show “This Morning” where Teague clarified that she had married her pirate husband Jack posthumously during a maritime ceremony.

“I had started on the road of spirituality in 2010 after my son died,” Amanda said. “I really wanted to know what was out there and it gave me a link to the other side.”

“I’ve never heard Jack or seen him in a physical spirit and it was only five years after I started doing the mediumship that he presented himself – we just started to talk a lot.”

But soon she started questioning the decision to marry the ghost.

“The first time that I noticed anything was a couple of months after we got married, my health started to decline,” she said. “Lots of bad luck started happening to me… This went on for almost two years, to the point where I ended up with sepsis last year and almost died.”

The reason, she thinks, was that Jack was actually an “energy vampire” who “bled her dry”.

“I realized that it definitely was him I had an exorcism in December of last year,” she said.

In the video below, you can see the full interview for yourself.