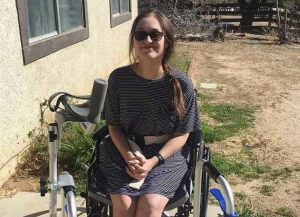 A resident of California (USA) had a car accident and lay in a coma for many days, and when she woke up, she suddenly spoke with a New Zealand accent, although she had never been to New Zealand before and had no connections with this country.

Summer Diaz, a 24-year-old Los Angeles woman, was crossing a pedestrian crossing on November 25, 2020 when she was hit by a car. Diaz received several serious injuries, the most dangerous of which turned out to be a craniocerebral one.

When she was brought to the hospital, she was put into an artificial coma for the duration of the treatment, and she remained there for two weeks. When she finally woke up, she did not understand where she was, what had happened to her, and could not speak.

Gradually, her condition improved, but she could not remember anything about the day when she was hit by a car, and she also had even more strange problems with her voice.

When she did begin to communicate, she realized that her voice did not sound the same as before. At first, she thought that her vocal cords were damaged due to intubation, but then it became clear that the problem was much more serious.

Speech therapists worked with Diaz and gradually she spoke better and better, but her strange new voice did not disappear. More and more people told her that her voice sounded with a strong accent, as if English were not her first language, and that she seemed to have come to the United States from some other country.

Moreover, her accent changed over time in such a way that at some point her voice sounded with a British accent, then with French, then with Russian, and eventually settled on New Zealand or Australian (they are similar).

Some of these accents only stayed with her for a few hours, others for several months. Her voice now sounds so New Zealand that some New Zealand natives, hearing her accent, thought she was from their country.

Doctors from time to time are faced with a similar phenomenon, which is called the Foreign Accent Syndrome. This is a very rare and poorly understood phenomenon, for which there is no definite treatment.

It is believed that this syndrome occurs in people who have suffered a brain injury, most often after strokes. In total, since 1907, since the discovery of this syndrome, medicine has registered only about 100 such cases.

Some of the accents of the victims went away on their own, while others remained with people for life. According to Diaz, her new accent suits her and even likes it.

Many causes of foreign accent syndrome are not curable, though medication can help manage the symptoms.

Much more problems are caused by her injured leg, because of which she is sometimes forced to ride in a wheelchair.

Scientists can’t explain why the Earth pulsates every 26 seconds