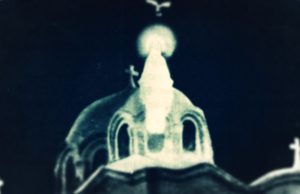 Our Lady of Zeitoun was a mass Marian apparition that occurred in the Zeitoun district of Cairo, Egypt, over a period of 2–3 years beginning on April 2, 1968.

The first apparition at Zeitoun was recorded on the evening of April 2, 1968, when a Muslim bus mechanic named Farouk Mohammed Atwa, who worked across the street from St. Mary’s Coptic Church in Zeitoun, supposedly thought he saw a woman attempting suicide by jumping from the structure.

Two other men also noticed a white figure on the top of the church and the sighting was reported to the police. A crowd gathered on the site and the police attempted to disperse it.

According to the police, the sighting was just a reflection of the light from the street lamps.

However, the crowds reportedly viewed the sighting as a clear apparition of the Virgin Mary, and so, the attempts by the police to disperse the crowd were unsuccessful. The event itself ended after a few minutes.

One week later on April 9, the phenomenon reoccurred, again lasting for only a few minutes. After that time apparitions became more frequent, sometimes two-three times a week, for several years, ending in 1971.

According to Coptic tradition, the site is one of the locations where the Holy family stayed during their flight into Egypt.

The head of the Coptic Orthodox Church of Alexandria, Pope of Alexandria, Kyrillos VI appointed a committee of high-ranking priests and bishops to investigate the matter, headed by Bishop Gregorios, bishop of postgraduate studies, Coptic culture and scientific research. On May 4 Kyrillos VI issued an official statement confirming the apparitions.

As the apparition appeared over a Coptic church, the Vatican left the investigation to the Coptic authorities. On May 5, 1968, Coptic Orthodox Pope Kyrillos VI approved the apparition.

The apparitions were also witnessed by President Gamal Abdel Nasser, and captured by newspaper photographers and Egyptian television. 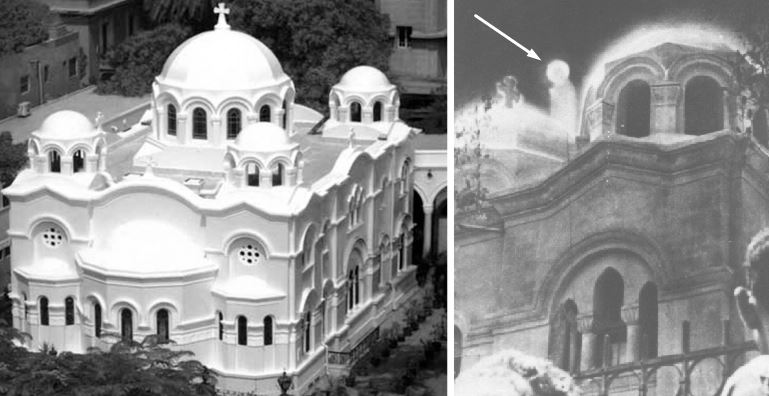 Investigations performed by the police could find no explanation for the phenomenon. No device was found within a radius of fifteen miles capable of projecting the image, while the sheer number of photographs from independent sources suggests that no photographic manipulation was involved.

Having been unable to produce an alternative explanation for the luminous sightings, the Egyptian government accepted the apparitions as true.

Sociologists Robert Bartholomew and Erich Goode offer the Zeitoun apparitions as a prominent case of mass hysteria: “It appears that the Marian observers were predisposed by religious background and social expectation to interpreting the light displays as related to the Virgin Mary.”

However, these interpretations don’t align with the fact that Muslims saw the apparitions including the Egyptian President Gamal Abdel Nasser who directly contributed to the persecution against Coptic and Jewish minorities since 1952.

Hence, it would be a contradiction to claim that Gamal Abdel Nasser joined Copts in their perspective of Mary. Moreover, persecution of Christian minorities in Egypt defies the concept that both Muslims and Christians could share the same view of Mary especially that the apparition occurred above a church.

Valley of Dawn: A Place Where Faith In Aliens and Jesus Come Together