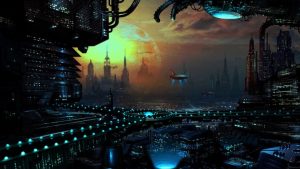 Few subjects have captured the imagination of people more than the possibility of alien life. Some scientists say city lights are the key to finding aliens.

The Study Suggests that Alien Cities Might be Detectable

A study from the Harvard-Smithsonian Center for Astrophysics and Princeton University relies on existing technology to detect the lights emitted by cities on distant planets. This, of course, assumes that aliens have large cities illuminated with lots of light. They would be similar to humans in that they need light to see at night. Maybe.

The proposed search would initially investigate Kuiper Belt Objects — KBOs — which occupy a distant region of the solar system far beyond Pluto. Several have been discovered and thousands are thought to exist. Over a thousand planets have been detected outside our solar system and some are large. They are all too far away to be studied with existing telescopes.

Of the KBOs so far discovered, all are smaller than Pluto and receive only feeble sunlight. The search for alien cities suggests that light from large cities on the night-side of these objects could be detected by telescopes and analyzed by spectroscopes to determine whether or not the light is artificially produced. All of this is admittedly a long-shot.

The detection of such lights on large planets outside our solar system will have to wait for more advanced technology.

SETI Still Has No Evidence of Alien Life

SETI — the Search for Extraterrestrial Life — began in the late 50s. SETI hunts for alien life by investigating star systems that are good candidates for having planets that might support life as we know it. SETI “listens” for signs of life, based on the assumption that some civilizations will use radio transmissions for communicating, but it is a daunting task.

The requirements for human life demand very special conditions. Nevertheless, there are many billions of stars within the Milky Way alone. Even if chances are slim, there may well be a large number of planets with intelligent life.

In 1977 one of SETI’s stations picked up a radio signal that had a pattern meeting the project’s expectation for being far beyond a chance signal. It lasted for 72 seconds and was determined to be from beyond the solar system. Now referred to as the “WOW signal,” it is SETI’s singular moment of real unexplained excitement. Regrettably, it was never detected again.

In 1961 astronomer Dr. Frank Drake developed what has become known as the Drake Equation, which was intended to estimate the likelihood of alien life in the Milky Way galaxy alone. The equation estimates 10,000 technologically advanced civilizations within the galaxy.

Although the Drake Equation is still frequently cited, the variables in it are based on best guesses, e.g., “the fraction of life sites where intelligence develops.” That fraction is not really known.

As such, the Drake Equation likely lacks much predictive ability and could be inaccurate one way or the other by quite a bit. Nevertheless it provides a framework to keep the search for aliens alive.

Stephen Hawking has a Negative Opinion about Alien Life

Humans have beamed signals into space toward star systems which are good “candidates” for intelligent life. The signals serve as a sort of a beacon to distant aliens that “We are here.”

In 1972 and 1973 the U.S. sent two space probes out of the solar system with plaques offering information about humanity and where earth is located. Dr. Frank Drake was involved in the project with popular astronomer and author Carl Sagan.

Famed physicist Stephen Hawking surprised many in 2010 when he announced that humans had best abandon the practice of trying to attract the attention of extraterrestrial civilizations. If they are out there, he believes they might be so far advanced that they would view humankind as an insignificant life-form and the earth as a place to be exploited.

Citizens of earth have no reason to believe that alien life would be friendly, like E.T. Aliens might view life on earth with the same disrespect that humans typically give a common housefly. The 1938 radio production by Orson Welles might become a reality.

The White House Offers an Official Opinion on Alien Life

The U.S. government responded recently to petitions requesting that the government “formally acknowledge an extraterrestrial presence engaging the human race.” The response was released on the blog of the White House Office of Science & Technology Policy. The official position was that the government has no knowledge of any evidence indicating the existence of alien life.

The interest in alien life just won’t go away. Speculation for over a century has led to the creation of efforts to detect alien life. Some seem far out, but according to famed scientists extraterrestrial life is out there, it’s just very far away and very hard to find. We might be better off not revealing ourselves to life-forms with unknown intentions.