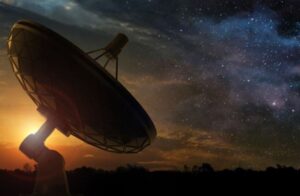 In 2014, a National Geographic study reported that 77 percent of Americans believe not only in the existence of aliens, but that they have been regularly visiting Earth.

The majority’s acceptance that there is life on other worlds in the universe continues to be fueled by credible eyewitness accounts from military and commercial pilots.

Even respected astrophysicist Neil deGrassi Tyson told Chris Hayes of MSNBC that we may have already been visited by alien life. Additionally, world famous and brilliant theoretical physicist Steven Hawking stated in his documentary Into the Universe with Stephen Hawking that “alien forms almost certainly exist”.

Popular conspiracy theories place alien visitation in Germany at the beginning of WWII. Indeed, they very much suggest not only direct involvement with the Nazi party but assistance with their plans of global domination.

Acceptance of their presence begs the obvious query as to why the Germans didn’t win. A reasonable deduction would be that Germany’s enemies had their own extraterrestrial support mechanism.

Ancient Aliens on The History Channel has aired numerous episodes supporting the belief that space beings were present in many cultures around the world including ancient Egypt and Maya.

With the majority of the country’s population mostly open to an eventual modern day encounter with non-secular beings from other solar systems, the big question isn’t if we will meet them, but should we? Here are some reasons why we might reconsider making direct contact:

It’s more than conceivable that a face to face, up close and personal experience with an extraterrestrial would instill a significant amount of fear inside the average person, despite their openness to the possibility.

As human beings, we generally fear that which is unknown and not understood. The visiting aliens would no doubt be subjected to a series of poignant and paranoid questioning. Our queries directly aimed at uncovering relevant information such as why they are here and more importantly, what do they want?

Until we uncover what we would hope to be benevolent reasons for their presence, we would most likely “greet” them armed with a full arsenal of weaponry. Our frightened display of distrustful hospitality might not be met with patience and cooperation thus, an altercation in which we would be ridiculously out-gunned is very possible.

Perhaps the announcement of an extraterrestrial’s arrival coming from a trusted source would belay some of our initial fears. Cosmic Awareness confirmed that excerpts from Pope John 23rd’s personal diary include contact with extraterrestrial beings that were concluded to be The Greys.

While a conversation between the Pope and an alien from outer space may initially sound like the beginning of a bad joke, a moment of reflection may reveal a very likely, if not surprising scenario.

Assuming the technologically advanced species doesn’t directly challenge our varied religious beliefs, would we be willing to accept their place in our God’s world? While that remains to be seen, some hope for a spiritual acceptance might be found with the Pope.

According to Vatican Radio, Pope Francis recently said that he would baptize visiting aliens and then offered, “Who are we to close doors?”

Sadly, that’s only one open mind in one of many religions.

Surely the aliens would bring their own religious beliefs with them, adding yet another to the list. In a world where hateful acts of violence and righteous judgement are not only fueled but often justified by the interpretations of ancient scripts, can we survive set of scriptures?

My inner-nerd can’t help but wonder if extraterrestrials subscribe to some sort of “prime directive”. For the non-trekkers, I refer to a moral code that disallows the interference and subsequent influence of a lesser developed species’ evolvement.

If they do adhere to such a scruple, a meeting with an E.T. would not occur in our lifetime. However, if a less scrupulous alien race visits and refuses to share their technology and medicinal advancement with us, we would, at the very least, take offense to this.

For many, the act of denying us advanced technology to better our lives and cures for disease that torment human beings and even rob them of their lives would be seen as nothing short of an atrocity.

Hardly the makings of a great, first date.

Assuming we adopt an “ask first, shoot later” strategy in the event of a UFO touch down on Earth’s soil, we would have a myriad of questions for our non-secular visitors. The most important queries to which we would want answers include why they are here and what, exactly, do they want?

Obviously, we won’t know for sure until when and if they arrive. For now, we can only speculate.