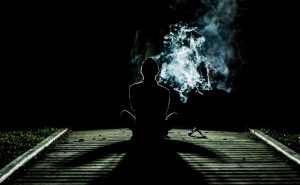 I know that in this style of writing, my story might seem like total B.S., but this really all did happen and still is happening. It’s ruining my mind, and my mental state, and I’m becoming more and more paranoid with each passing day. I hope none of you ever have to experience anything quite like this in your life, EVER.

So for as long as I can remember, I have been around ghosts/spirits in my everyday life. Why? I don’t know, but out of everyone in my family I’ve had the most paranormal encounters (although we each have our fair share of encounters). But nowadays it seems as if I’m the only one who is still seeing entities and I have no idea why.

So let’s go to the beginning where things all started to happen.

I was about three years old when my parents started to notice weird things. According to them, I would have these night terrors all the time that would scare me shiatless. And they were all about some sort of weird entity. Not one night terror didn’t include this entity.

I can vaguely remember what it looked like (I was too young to remember it all). But it was usually a dark shadowy figure with red glowing eyes. Sounds like your average demon/spirit right? Well, this was no regular entity. Not long after I saw it in my dreams (maybe about two or three years after), I actually started to see it in real life. What I thought was only something that existed in my mind was about to get a whole lot realer.

I don’t recall ever seeing this entity during the day, but I sure did see a whole lot of it during the night. Although it never moved or made a noise, it stared me down with its red eyes. After we moved out of that house when I was about six, we moved into another one (which was a bit newer). And what do you know? I stopped seeing it after a while.

But that was not the last of the entity, it came back as an even more terrifying thing. Now, I have no idea if this was the same sort of entity that stalked me before, but it certainly seemed like it. This form of the entity took its time in introducing itself to me, but did so in the same manner as before. I was about 8 and a half when it started to manifest in my dreams. But this time it did not show itself fully. I would see a shadow of it near the end of my dream (or when I was about to wake up screaming) and it would always mumble something that I could not comprehend.

After many, many dreams like this, it decided to take it a step further when I had my first “False Awakening”. In this “False Awakening”, I woke up in my bed and looked around my room and saw nothing, but I heard loud footsteps approaching from down the hall. I couldn’t move or speak and the footsteps were getting closer and closer. All of a sudden the footsteps stopped and I saw a shadowy figure wearing a trench coat standing in my doorway. There were no details to it other than the fact that it looked like a human being.

Once again, it mumbled something I could not hear before morphing into some sort of cloud of darkness and shooting towards me. At that point I woke up, or so I thought. I had another dream where almost the exact same thing happened, and then I woke up for real. I didn’t sleep easy for weeks after that.

But luckily, things took a turn for the better. After that incident, the entity left and did not come back to me for quite a while.

A couple years later, we had moved into another house in the err “sketchy” side of town since money was tight at the time. But ever since day one, I had the feeling that something about this house was wrong. I would not even dare to go down into the basement. And to make everything worse, a man was murdered down on the corner of our block (about three houses away from ours).

I thought nothing of it at first, but I began to notice something about that spot whenever I was standing there getting ready to cross the road to go to the park. That spot was always cold, even in the blazing hot summer weather. And to make things even stranger… I was the only one who could feel it. None of my sisters could, not even my parents. I was the only one who could feel the coldness of that spot. Needless to say I avoided it all the time shortly after.

Now about the house. This house was basically the equivalent of hell (for me anyways). I felt like I was being watched 24/7 by something inside of the house, rooms would inexplicably turn warmer or colder when I walked into them, I heard my name called more than once while home alone (it only ever happened when I was home alone too), I would constantly see strange shadows that seemed to morph or resemble a person and I would see apparitions from time to time. None of these ever happened to my other family members, except for two of my sisters who claimed to see apparitions a lot.

The most common apparition that I saw was that of a little boy about 7-8 years old. He freaked me out the most because he would always appear to be staring at you… Although he had no eyes. It looked as if they had been gouged out with a knife. He appeared constantly in your path or in places where you would spot him for a second and then he would disappear.

The other apparition was of a little girl (fitting, huh?). Now I only saw her once, but she was the reason I didn’t want to go back downstairs EVER AGAIN. I was putting something in the deep freeze, when out of the corner of my eye I saw someone under the stairwell. Assuming it was the little boy, I paid no attention (he seemed to be friendly despite his disturbing appearance). But then I noticed that this entity was not disappearing like the little boy always did. So I looked up and saw what looked like a little girl about 5-6 years old in old-timey clothes sitting there, staring at me. I didn’t remember much after that since I booked it out of the room and up the stairs.

The next thing I want to talk about is the fact that I had my name called more than once by something not human. But whatever was calling my name was quite possibly the most sinister thing I’ve ever met, it almost seemed like the Devil himself was calling me. But it did not sound like the devil, it imitated the sound of my mother’s voice. Usually, it would call my name and I would go out of my room… Only to find myself completely alone. I would look around a little just to see if anyone was indeed there, but there never would be. But the most unsettling part about this was that after I looked around I would hear heavy footsteps coming up from the basement. And this happened EVERY TIME.

All these events (except for the little girl) would happen to me on daily basis and never ceased. But after my parents noticed my “declining” mental state, they decided that it was time to move once again. So a few years later, we moved to the house in which I am currently typing this out. My mental state turned back to normal and I was happier than ever now that these things have stopped happening to me.

But things are getting weird again, and it’s all just started. For the first time in about 3+ years, I saw my first apparition. It was about last week, I got home from school and stepped in the back door. I took off my backpack and looked up just in time to see a pair of (what seemed like at the time) disembodied legs rushing into the living room. Figuring it was my mom’s boyfriend, I thought nothing of it… Until I realized I was home alone. I hid in my room for the rest of the day and refused to come out after that.

I don’t want this all to happen again as I’ve already been traumatized from past events, but it’s almost as if these entities won’t leave me alone. None of my family members report anything out of the ordinary about this house, but I can just tell that there’s something here, something that won’t leave me alone.