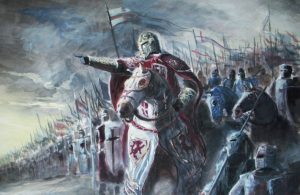 The mysterious organization known as the Knights Templar has been the subject of countless speculations and conspiracy theories for years now, and several esoteric historians claim that this secret order has been largely responsible for influencing the course of Western religion, literature, politics, and history since the Middle Ages.

They have been rumored to be the possessors of some of the most valuable treasures on Earth (including the Holy Grail), and they are commonly associated with other secret societies such as the Freemasons and the Illuminati.

So who exactly were the Knights Templar, and how has their legend endured throughout the centuries? Their origins can be traced back to the days of the Crusades, when several European Catholic Christian fighting forces descended upon Jerusalem to conquer the Muslim-controlled Holy Land.

After gaining control of Jerusalem in 1096, the Crusaders began welcoming a steady stream of European pilgrims into the Holy City. The only problem was that many times these travelers would be assaulted, robbed and even killed while trying to make their journeys, so roughly 20 years later the Knights Templar was formed as a type of “police force” to protect the pilgrims as they traveled.

This new band of monastic warriors was founded by nine Frankish knights and veteran Crusaders, operating under the official (and somewhat lengthy) moniker “The Poor Fellow-Soldiers of Christ and of the Temple of Solomon.” Other common aliases for the Order included “The Order of the Temple”, or simply “The Templars”.

This small group of nine knights soon flourished into well over two dozen trained warriors, at which time King Baldwin II of Jerusalem decided to donate a wing of his expansive palace to the knights. This section of the king’s palace was especially significant, because it was believed to rest upon the original site of the biblical Temple of Solomon.

In 1129, Pope Honorious II convened the Council of Troyes, in which the first Grand Master of the Templars, Hugh de Payens, attended to represent the burgeoning organization.

During the Council, the officers of the Catholic Church officially endorsed the Templar Order, and Saint Bernard of Clairvaux, a highly influential figure in the Catholic Church, penned the now-famous “Regula”, a set of governing rules around which all Templars were to order their behavior.

St. Bernard based this document upon the rules of the Cistercian Order to which he himself belonged, but it eventually became evident that the majority of the Templars did not adhere to the Regula in practice to any significant degree.

This public vote of confidence by the Catholic Church caused the Order to increase in membership and influence. The Knights Templar assumed the public disposition of a military order as well as a philanthropic charity, but in the minds of many historians, the agenda of this secretive brotherhood extended far beyond performing acts of charity or public safety.

It is now believed that the Templars were working on amassing great power and wealth under this unassuming facade of charitable deeds, in order to accomplish a more ambitious objective.

Grand Master Albert Pike, one of the most influential Scottish Freemasons of the nineteenth century, made reference to the Templars’ ulterior motive in his influential book, Morals and Dogma.

Pike claimed that “their secret object was the rebuilding of the Temple of Solomon on the model prophesied by Ezekiel.” Pike also mentioned that the Knights Templar were “devoted to opposition…to the crown of Rome and its chiefs.”

According to the extensive research of Masons Robert Lomas and Christopher Knight, authors of The Hiram Key, the Templars began conducting detailed archaeological excavations of the temple during their time of residence in King Baldwin’s palace.

Lomas and Knight assert that the Templars discovered some type of “secret” among the ruins of the temple. This mysterious discovery dramatically changed the worldview and beliefs of the Templars, prompting them to adopt non-Christian teachings in favor of black magic rituals and mysticism.

This document spread like wildfire throughout Christendom, garnering scores of new recruits for the Order, as well as large amounts of donations, bequests and gifts from Barons and Monarchs throughout all of Europe.

In relatively little time, the Templars attained an unprecedented level of wealth, power and privilege, and rapidly evolved into the most successful financial, military and industrial organization in existence during the Middle Ages.

The Templars are generally credited with inventing the world’s first functional banking system, as well the development of relatively sophisticated systems of trade.

In 1291, the Order took a major blow when they lost the Holy Land to the Muslims during the Fall of Acre. This defeat prompted King Philip IV of France to seek the formation of a new military order that would merge the Templars with other fighting orders, under the king’s direct oversight.

Jacques de Molay, the last Templar Master of the Middle Ages, rejected this idea, seeing it as more of a move to boost the king’s political clout than to gain a strategic advantage. Upon learning of de Molay’s refusal to comply, King Philip quickly began to make moves to disband the Order.

It is important to mention that King Philip IV had borrowed significant amounts of money from the Templars, and most historians concur that the king’s main motive was to avoid repaying his debts. He levied several charges of heresy against the members of the Order, and on Friday, October 13th, 1307, he issued a decree to have all of the Templars within his realm arrested.

Many of the knights were brutally tortured and interrogated, and several of them were burned at the stake, including de Molay. As the Templars were spread throughout several areas of Europe, it is commonly believed that a significant portion of the knights were able to escape the inquisition.

Most esoteric historians agree that the Knights Templar went underground for several centuries, hiding their treasures and only passing the knowledge of their rites to very exclusive company. Many researchers believe that large numbers of Templars escaped by way of the Alps, which would have been a logical route to take for the knights who were situated in the south of France.

In their book entitled The Warriors and the Bankers, authors Stephen Dafoe and Alan Butler argue that the Templars may have played a significant role in the formation of what would later become Switzerland, not only because of its geographical relevance to the Alps, but also because many of the characteristics of Swiss culture share similarities with those of the Templars, including their banking expertise.

In addition, the famous Templar flag (a red cross on a white background) shares a striking resemblance to the Swiss flag (a white cross on a red background).

Many researchers claim that the Templars began to seek refuge in the Masonic lodges of Scotland and Ireland during the 17th and 18th centuries, and from there, they began to merge their practices with Freemasonry.

In modern Freemasonry practice, Knights Templar degrees are among the highest conferred in their practice, with the highest being known as “The Order of the Temple.”

It is not fully known whether or not the Knights Templar are indeed hiding a vast store of wealth, but the organization continues to remain a source of speculation for esoteric researchers.

Many of their rituals and rites are still enshrouded in secrecy, and theories regarding the organization’s influence range from relatively negligible to completely pervasive. What is known is that the legend and history of the Knights Templar continues to fascinate observers worldwide, and that doesn’t look to diminish any time soon.