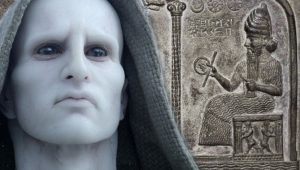 The Annunaki (also referred to as the Annunaku or Annuna) are a collective of dieties attributed primarily to the ancient Sumerian culture of Mesopotamia, although similar references exist in the writings of the ancient Akkadian, Babylonian and Syrian cultures as well.

There are a myriad of theories and speculations regarding who these intriguing beings actually were, but one thing that is generally agreed upon is that the Annunaki were considered to be entities of a higher order than human beings.

The word “Annunaki” is a combination of the two words “Anu” and “Ki”, which mean “heaven” and “earth” respectively, and is interpreted to mean “those who came from heaven to earth”. Other interpretations of “Annunaki” include “those of a princely seed or offspring”, “those of the royal blood,” or “those generated from the divine.”

Many researchers claim that the name “Annunaki” represents the offspring of the sky god Anu, a key figure in Sumerian mythology who was considered to be the god of all gods, and the lord of the constellations. Ancient Sumerian cuneiform writings depict the Annunaki as “sky gods” who came down to earth and essentially established the Sumerian government and cultural order.

The exact identity of the Annunaki is difficult to nail down because there are many different cultural accounts of their involvement in ancient civilizations. The Annunaki appear in the Enuma Elish, a Babylonian creation narrative, in which they were assigned by the patron god Marduk to oversee various regions of heaven and earth.

Later Babylonian and Assyrian mythologies depict the Annunaki as being the children of brother and sister gods known as Anu and Ki, who were ultimately the descendants of the gatekeepers of the temple at Abzu, where the original creation of mankind was believed to have taken place.

Other ancient literary works associate the Annunaki with the underworld; for example, the Epic of Gilgamesh mentions the Annunaki when Utnapishtim recounts the story of the Great Flood. In this account, the Annunaki are the seven judges of the underworld (or hell) who begin to set fire to the earth immediately before the flood comes.

In some Sumerian myths, the word “Annunaki” is used synonymously with the word “Igigi”, a term also used to describe a group of deities. In one well-known Akkadian epic, the Igigi are a separate group of gods who were enslaved by the Annunaki but eventually revolted against them, prompting the Annunaki to create humans in their place.

One of the more controversial theories regarding the Annunaki is that they were a hybrid race of extraterrestrial beings that visited the Earth in ancient times, and made contact with the Sumerian people during the Bronze Age.

This view was popularized by the late Zecharia Sitchin, an anthropology and archaeology enthusiast who authored several bestselling books proposing this perspective. Sitchin’s writings, along with the works of earlier authors such as Erich von Daniken and Immanuel Velikovsky, helped to develop what is commonly known as the “ancient astronaut theory.”

Also referred to as the “ancient alien theory”, this hypothesis asserts that Planet Earth has routinely been visited by extraterrestrial beings throughout history, and that these entities have made contact with various ancient civilizations in order to develop and influence human culture and affairs.

Although Sitchin’s works have been largely dismissed by scientists and academics, the popularity of his subject matter is undeniable; he has sold millions of books worldwide, and his works have been translated into over 20 different languages.

Even though Sitchin was not formally trained in the fields of archaeology or anthropology (he earned a degree in economics from the University of London), he taught himself the Sumerian cuneiform language and visited several important archaeological sites.

According to Sitchin’s 1976 book “The 12th Planet” (as well as his subsequent works), the Annunaki came from a planet known as Nibiru (also referred to as “Planet X”), an undiscovered planet makes a complete orbit of the Earth’s solar system every 3600 years.

Sitchin asserts that Nibiru lies just beyond Neptune, and that its elliptical orbit puts it closer to the Earth during certain periods of time that occur on a regular cycle. Sitchin also theorized that the Earth itself was actually created from a catastrophic event in which Nibiru collided with another planet known as Tiamat. The fragments from this cosmic collision purportedly created the Earth, as well as the asteroid belt.

According to Sitchin’s interpretation of the ancient Sumerian writings, the Annunaki first arrived on earth over 480,000 years ago in search of gold and other minerals in order to help restore Nibiru’s dying atmosphere. Niburu had been essentially “bombed” in a celestial war by an entity known as Tarnush, and its protective atmosphere was rapidly depleting.

The Annunaki’s solution was to launch out on an interstellar mission to locate other planets from which to mine gold and other elements. Once the Annunaki discovered gold dust in the asteroid belt, they surmised that Earth would also contain gold.

They arrived on Earth and began mining gold and other important minerals, and then set up bases or “staging areas” on Mars as well as Kingu (the dark side of the moon) to act as storage facilities for the gold. Large spacecraft were constructed at these bases in order to transport the gold to Nibiru, which some researchers claim is actually a large spacecraft itself known as the “mother ship.”

While many of Sitchin’s claims seem outlandish, his writings have influenced a large number of ufologists and paranormal enthusiasts all over the world. A large number of Sitchin’s followers believe that the Annunaki are still alive and active on our planet today, and may be dwelling among us in half-human, half-alien form.

Sitchen claimed that at some point in history, the Annunaki began procreating with human women in order to produce hybrid beings that could be used as slaves to help mine gold and further the Annunaki agenda. Sitchen also asserted that the Nephilim mentioned in the Christian Bible (referred to as “giants” in Genesis 6:4) are actually the Annunaki.

As the popularity of Sitchin’s writings continues to increase, more and more theories have emerged regarding the Annunaki’s presence and influence on the Earth. Many who believe in the Annunaki claim that they represent a race of reptilian or snake-like aliens who can change their form or appearance at will (i.e., shape-shifters).

Others claim that the Annunaki still remain in power, but choose to exercise their power through certain human/alien hybrid bloodlines, a theory that has given rise to countless speculations regarding the Illuminati and other esoteric secret societies. While it is doubtful that many of the various theories and postulations surrounding the Annunaki will ever be proven beyond the shadow of a doubt, it is a fascinating and intriguing topic to investigate nonetheless.

How Many Aliens Do We Have?