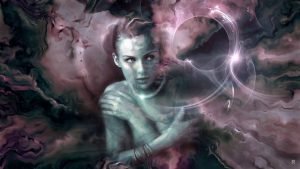 If we can attract whatever we want simply by our positive focus, then whatever happened to Karma?

Many of the books written on positive thinking talk about ‘the Law of Attraction.’ But, oddly they hardly mention the ‘Law of Cause and Effect’ or karma that is mentioned in all the great spiritual texts, and by living gurus and saints who acknowledge its existence.

The fact that karma is hardly ever mentioned may not be because the authors of these books on positive thinking don’t believe in, or want to acknowledge its existence.

Perhaps it is simply because they don’t want us to focus on fearful thoughts of what bad karma we may have accumulated. Because what we put our attention on the most, is what we are most likely to attract into our lives.

Karma is a Sanskrit word that means action. It has often been described as ‘The Law of Cause and Effect.’ In other words, what goes around comes around.

Buddhist teachings state, “The theory of karma is a fundamental doctrine in Buddhism. This belief was prevalent in India before the advent of the Buddha.”

In Christianity karma gets a mention in the New Testament, “Whatsoever a man soweth, that shall he also reap.” (Galatians 6:7)

Maharishi Mahesh Yogi, the Hindu Holy man who brought Transcendental Meditation or TM to the West had this to say about karma. “Problems or successes, they all are the results of our own actions. Karma.”

According to the Indian Saint, Mata Amritanandamayi, better known as Amma, “Whether you believe in it or not, the fruits come, the law of karma operates. But do not try to analyze how and why, because the cycle of karma is as mysterious as God.”

Our Own Experiences of Karma

Whether we want to accept that karma exists or not, we would all have experienced a time in our lives when we have done a bad deed or thought a bad thought and suddenly something not so nice happens to us.

How can we explain why some people are born into incredible riches and throughout life everything falls into their lap, whereas other people are born poor or chronically sick and have miserable lives despite everything they try to do to change their circumstances?

Buddhist teachings say “This inequality is due not only to heredity, environment, ‘nature and nurture’, but also to karma. In other words, it is the result of our own past actions and our own present doings. We ourselves are responsible for our own happiness and misery.”

Can We Avoid Karma By Our Positive Thoughts?

If we have built up some bad karma by our past actions in this life, and in others before it, then how is it possible that we can just avoid any repercussions by simply saying some positive affirmations and believing we can have what we want?

It all seems a bit too simple. If this were the case then why do all the spiritual teachers focus so much on us getting rid of bad karma? Surely all you have to do is say a few positive statements and change your belief system and your life will be free of suffering?

According to the experts on the subject of karma, no amount of affirming or believing is going to let us off the hook. It may however lessen the severity of what is coming to us, especially if our new found positive view on life has an altruistic flavour.

Can Meditation Get Rid of Bad Karma?

In his book The Science of Life and the Art of Being, Maharishi Mahesh Yogi said, “When the standard of consciousness is raised through the process of meditation, the action performed at that higher level of life energy and intelligence will have an overriding influence on karma from the past and will produce maximum results.”

Perhaps we can only truly become the master of our own destiny when we have learned to live in such a way that our good actions have the effect of canceling out, or greatly minimizing any past karma we may have created.

Better to Be Positive

Whether karma exists or not, life experience tells us that it is always best to be as positive as we can, to be kind, generous, honest and compassionate, and to have faith that whatever happens to us is ultimately for our highest good, even if we don’t think so at the time.

If we can take a trusting approach to life, rather than worrying about what bad karma we may have, we will surely get a smoother ride.

Chakras – When You Want Them Open And When Closed

24 Most Important Principles Of Life

How the Spiritual World Works

Soul Retrieval – A Shamanic Approach to Healing the Wounded Soul