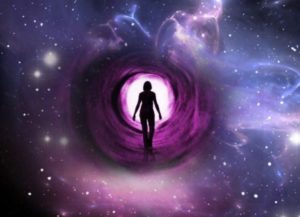 Traditionally astral projection has been defined as the human mind or spirit traveling free from the flesh of the body to interact with a plane called the astral body.

There are several methods by which a person may astral project, some people can do this naturally while others may harbor a subconscious fear of leaving the body or never being able to return and thus will never be able to project themselves into the astral plane.

Each method will vary on the particulars but they all boil down to making oneself comfortable and entering a self hypnotic state by thought, the recitation of a mantra, or some other repetitive mental act.

When in this state a person envisions passing up through their material body and traveling around as they wish.

The common or prevalent belief is that people who astrally project themselves are actually traveling through a separate plane of reality which mirrors the physical. As such one is free to travel through this plane and explore at will.

Over the past few years this belief has come under fire by contemporary arguments. Often a person who is astrally projecting will only be able to view their astral body for a few seconds before it melts away before the eyes.

It is unwise to consciously look at one’s own form when astrally projecting. Also when traveling through the astral plane people are often unable to pass through representations of physical objects such as walls or doors without the world around them devolving into a swirl of abstract maddening colors and shapes.

At this point the astral traveler will often panic and snap back to their physical form. The same happens if one passes through a door or window in a room that isn’t actually there in the physical plane.

Proponents of this belief state that in reality what is happening is instead of leaving the physical form people are in fact delving deeper into their own subconscious minds. In effect, what one is experiencing is a waking dream or a delicate interplay of the conscious and dream minds.

Without the governing rationale of the conscious mind the perception of physical dimensions ceases, leaving the dreaming mind to run rampant and makes no sense whatsoever.

When one passes through a wall or ceiling the conscious mind rebels and breaks the cycle between the two minds, causing the distressing and abrupt visual and aural sensations.

But when one passes through a window or door that isn’t actually present in the physical realm the balance of power is tipped in the other direction and the dreaming mind takes over.

Psychic Implications of the Argument

In essence what is being argued is that people don’t in actuality project their mental selves outward into a static plane of existence.

What they are really doing is projecting themselves inward into the turbulent depths of their own minds, where the subconscious mind reigns supreme and symbolism is the real means of communication.

In this realm the conscious mind translates the function of the subconscious mind into something coherent and perceptible to the mental self.

The Feeling of Being Watched – Proof of Extrasensory Perception?