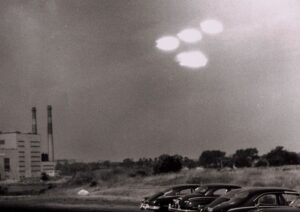 As a group of American soldiers were preparing to bombard a nearby village about 60 miles north of Seoul, the unit saw a strange vision up in the hills – jack lanterns wafting across the mountain.

Or at least, that’s the story Pvt. First Class Francis P. Wall and the rest of his regiment told. Even more mysterious is what Wall and his buddies say happened after – a pulsing, attacking light that came with lingering and debilitating physical symptoms.

The year was 1951, and the US was 12 months into the Korean War. Stationed near Chorwon, PFC Wall and his buddies were completely unprepared for what happened to them in the Korean hills.

As they watched, an alien craft made its way toward the village. Artillery started to explode. Wall recalls that the object would get right into the center of an artillery airburst but never seemed to show any signs of damage.

Later, Wall confirmed that the object could maneuver through sharp turns and seemed to have out of this world navigational capabilities.

Then all of a sudden, the object turned toward Wall and his unit. It changed colors from orange to a pulsating blue-green light, one so bright that it was almost difficult to look at.

Wall asked his commander for permission to fire from his M1 rifle, but as the bullets hit the craft, they only made a metallic ding sound before falling to the ground. The object started to shuttle, sprint from side to side and flash its lights on and off.

What happens next is even harder to believe. Wall says he and his unit were attacked by some form of a ray that “emitted in pulses, in waves that you could visually see only when it was aiming directly at you.

That is to say, like a searchlight sweeps around and the segments of light … you would see it coming at you.” Walls told this to John P. Timmerman at the Center for UFO Studies during a 1987 interview.

Wall recalled a burning tingling sensation sweep over his entire body. Everyone in his unit rushed into underground bunkers and looked through the windows as the craft hovered above them. Then it shot off at a 45-degree angle. All of a sudden, just as quickly as it appeared, it was gone.

Three days later, the entire company was evacuated. When they finally received medical treatment, all were found to have dysentery and a very high white-blood-cell count.

To Richard F. Haines, a UFO researcher, and former NASA scientists, the results sounded like symptoms of radiation poisoning.

So what happened to Wall and his buddies?

At first, many historians believed the sightings to be Soviet experiments based on German technology and foreign research. But after the fall of the Soviet Union, that theory was debunked, as several years of Soviet sightings were revealed.

From 1952 until 1986, the Air Force ran Project Blue Book, a study into unidentified flying objects and their threat to national security. When the project ended, the Air Force announced they’d discovered nothing unusual.

But for Wall and others like him, they aren’t so sure. If the craft had really been Soviet experiments, as so many suggested, then they would have appeared in other conflicts besides the Korean War.

And since the sightings recorded by members of the Soviet Union so closely resembled that which Will witnessed, many wonder if it wasn’t something else entirely.

Even though the vast majority of all UFO sightings turn out to be ordinary phenomena like clouds or human crats, there’s still no conclusive evidence about what Wall saw.

Without testimony from the others in Wall’s unit, there’s no way to corroborate what he saw, making it even more impossible to determine just what happened that day in the Korean hills.

Author: Jessica Evans, source: We Are The Mighty: Military Entertainment for America by Veterans