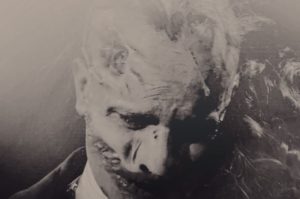 Many who read “The Ghost of Dr. Harris” might think it’s fiction; however the story is true and captures Hawthorne’s emotions with his ghostly encounters.

Nathaniel Hawthorne was born Nathaniel Hathorne in Salem, Massachusetts and was said to have changed the spelling of his birth name, adding the “w” because his great-great-grandfather was one of the judges in the Salem witchcraft trials.

Hawthorne is best known for his fiction, especially The Scarlet Letter and The House of the Seven Gables. Edgar Allan Poe publicly praised Twice Told Tales. Hawthorne’s short story about Dr. Harris’ ghost was a departure from his style of Dark Romanticism.

In 1830, the author was living in Boston and would go to the library, the Athenaeum, daily to do research and write in its reading room. The Reverend Dr. Harris, an octogenarian clergyman, also went to the library daily to sit in a chair, by the fireplace and read the Boston Post.

Harris was a small, fragile-looking white-haired man. Hawthorne was with a friend when he saw the minister on the street. The friend called to Harris who turned around and responded vivaciously.

After they parted company, the author asked his friend who the gentleman was. The response was that he was the Reverend Harris from Dorchester. Hawthorne had heard of him as a noble gentleman, but had never been acquainted with him before or after this incident.

From that time on, the author looked at him when he entered the reading room and felt a type of bond with the minister.

One day, around noon, Hawthorne saw Harris in him sitting in his customary place and noticed nothing different about him. That evening a friend told him Harris had died.

The author told the friend he was wrong because he saw him that morning. The friend, again, told him the man was dead and validated it with facts. Hawthorne tried to convince himself that he was mistaken in seeing Harris.

He thought he would never see Harris again, but when he entered the reading room the next day, he saw the minister sitting in his usual place reading the newspaper.

It was then that he realized he was seeing a ghost. Hawthorne didn’t feel fear, awe or any other emotion that most people experience when they see a ghost. From time to time, he would look up and see Harris’ ghost. He wrote that the specter didn’t notice him and that no one else appeared to see the specter.

Encounters were so common that Hawthorne accepted the phantom’s existence as he did with those “old fogies” who basked in the fire’s warmth and dozed, newspapers in hands. He found it curious that the ghost was solid, not vaporous.

It wasn’t until long after the encounters ceased that he became aware of how odd and strange the incidents had been. He was trying to make sense of the affair by telling people about Harris’ ghost and gauging their reactions to it.

What Was Hawthorne’s Ghost?

Skeptics might say Hawthorne was hallucinating. He saw something for which there was no external stimulus. The image was a product of the author’s mind.

This can be discounted because there were multiple sightings and Hawthorne clearly described his reactions to the ghost.

Harris’ ghost was a haunting. Hauntings are like a video tape, energy imprinted on time and space. They can be seen, heard, smelled, felt by touch, tasted and sensed.

They have no intelligence. Not all people within a group perceive a haunting. It’s possible that others in the reading room saw Harris and, like Hawthorne, didn’t mention it.

The Ghost of Mary Schlais

Reader’s story: The Old Man Ghost In Our House