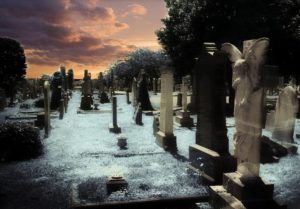 A relaxing drive with friends left Sarah Ryan with mystery. Sarah was 22 back in 1977, when she and 2 friends decided to drive an area between Savoy and Florida, Massachusetts. The road they took ran along side the Savoy Mountain State Forrest. While many of the small, unpaved side roads were unnamed, the 3 grew up in the area and knew them all well. The friends turned off the main road onto one of the side roads they had traveled many times before.

The road they chose, as they were aware, was a dead-end. At the end of the road was an area of woods which they particularly enjoyed and had walked through on countless occasions. On this day however, their favorite spot revealed something new, a cemetery, surrounded by a high fence. The first thought to go through Sara’s mind was “who would put a cemetery there?” There were no roads leading to it and no signs that anyone other than them ever visited the area.

As the 3 friends approached the strange sight and looked through the locked gate, it was obvious that the cemetery was well taken care of. They wondered where the equipment for maintenance was kept, there were no buildings. The biggest mystery to them was why they had not seen the cemetery before. Unable to enter the cemetery the 3 decided to return home. The next day they would return to the site, with 2 additional friends.

Once again Sara drove, taking the exact route they had taken the day before. When they reached the location where they had seen the cemetery, there was nothing. They knew they were in the right spot, it was just that the cemetery, which seemed to suddenly appear had now vanished. Future attempts to find the mysterious cemetery turned up nothing and while never forgotten, the event began to fade from Sara’s memory as the years past.

Then in 2002, some 25 years after Sara and her friends had seen the vanishing cemetery, she was sitting at her home talking to her son-in-law. Sarah related the strange story to the young man and got a surprising response. He told Sarah that about 10 years earlier he and a few others used to ride mini bikes at the same location.

They had ridden there so often that the bikes had dug paths into the ground. One day he emerged from woods on his bike into a small clearing and nearly crashed. Where there had been open land before was now a high fence surrounding a well-kept cemetery. strangely, the path that he had been riding on went right up to the fence and continued inside.

Just as with Sara and her friends, her son-in-law and his group returned later to try to find the cemetery. They met with the same result, the cemetery had vanished. The path he had been riding on that lead up to the cemetery fence, was on open land, just as it had always been before the day they saw the vanishing cemetery.

Paganism, Wicca and Witchcraft: How Are They Different?