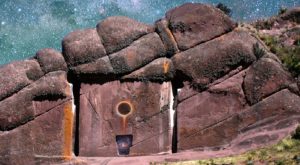 There are many legends associated with the “Gate of the Gods” carved into the rock in Peru. Most of them talk about an energy portal through which mortals and gods can move from one dimension to another.

Let’s move our minds back to Peru, to the rocks on the shores of Lake Titicaca. We will land in front of the mysterious site of Hayu Marka. It is there that a powerful structure is located, called the Gate of the Gods or Puerta de Hayu Mark.

Gate of the Gods: history and discovery

The gate, carved in pink marble, is one of many mysterious finds in Peru. The first information about it can be found in the mythology of the Incas.

According to the Incas, Lake Titicaca was the birthplace of the world. It all started from here, and it is here that souls return after the death of people.

In 1996, Peruvian guide José Luis Delgado Mamani stumbled upon the Gate of the Gods while exploring the area. Mamani said that when he approached the rock formation, he almost lost consciousness from the shock he experienced.

The reason was that the guide dreamed of this rocky gate long before he saw it with his own eyes. This cannot be a coincidence. Most interestingly, a mysterious blue light emanated from the massive portal. Mamani himself calls the incident “God’s revelation.”

What is the purpose of the mysterious object?

Many believe that the Gate of the Gods is no ordinary rock formation. They consider them to be a powerful energy portal through which gods or extraterrestrial beings, as well as ordinary people, or at least their souls, can pass from one dimension to another.

Local legends say that in ancient times, the heroes of the tribes that inhabited this region were honored to pass through the Gate of the Gods to the afterlife when their time on Earth expired.

The mysterious portal is 7 meters high and 7 meters wide. It is shaped like a door, but the most interesting thing is that there is another smaller door in the middle. And there is a small hole in it, which the local tribes consider a lock to open the portal.

They believe that in the future this door will open much wider than its usual size, and through it the gods will come to earth and help people. 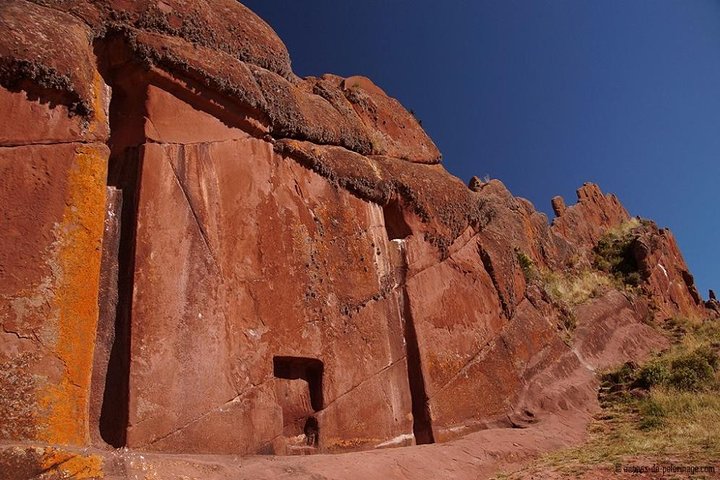 Locals also say that during the time of the Incas, fleeing from the Spanish conquistadors, one priest found himself in front of the Gates of the Gods. The portal was guarded by a group of shamans.

The priest carried a golden disc. He and the shamans were surprised to find that it fit perfectly into the “lock” of the smaller door. They inserted a disc into it, and the portal opened.

Everything around was filled with a pale blue sparkling light. The priest hastily crossed through the open door to escape the oncoming conquistadors. He passed into some other, mysterious dimension, still unknown to man.

But let’s return to the present. Upon discovering the Gate of the Gods, José Luis Delgado Mamani immediately contacted local archaeologists and historians. This place immediately attracted their attention, and many researchers of the culture and life of the Incas were brought to work.

Scientists remain skeptical of the idea that the Gate of the Gods is a portal to other dimensions. Their conclusion is that this door most likely does not even lead to underground tunnels or other shelters. In short – according to them, this door leads nowhere.

Interestingly, many researchers experience unusual sensations while examining the door. Some say they felt a subtle pulsation of energy from within as they approached the gate. Others report hearing strange rhythmic music coming from within the stones. Others say they had strange visions of burning pillars and other things not related to our world.

This mysterious gate is, of course, not the only place pointed to as a portal to other worlds and dimensions. They exist in many other places around the world. And whether the legends about them are true or just fiction, we can only guess.