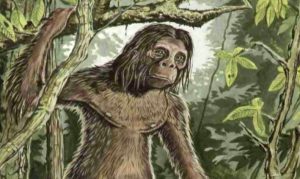 Orang Pendek, also spelled Orang-pendek, means “short person” in Indonesian. People have sighted them in and near Kerinci-Seblat National Park in Sumatra.

While the natives have legends of forest spirits and magical beings, the cryptid is described as another animal of the forest, like the orangutan, whose name means forest person. It been described as ape-like, walking on two legs, with strong arms and chest and covered with short reddish fur. Witnesses are divided into four groups.

The Suku Anak Dalam are the aboriginal people who have inhabited forests, far away from villages and cities. They have lived with the UMA for centuries.

This tribe describes the animal as another denizen of the jungle. The Suku Anak Dalam know when they are entering and leaving the Orang Pendek’s territory and often leave offerings of tobacco to keep it content.

Virtually all local villagers know someone who has sighted the UMA. It appears that villagers accept a common story about the hairy biped.

Many say its feet are connected backwards to its ankles so, when it walks, no one knows which way it’s going. This isn’t a characteristic for known animals, although there are rare cases of this abnormality in individual ones. These people have myths, so it’s difficult to discern reality from them.

As was the practice, in the early part of the twentieth century, people gave only their last names or used initials when they wrote accounts of paranormal experiences; therefore, there are no first names in these encounters.

In the early 1900s, Indonesia was a Dutch colony. In 1923, explorer Mr. Van Heerwarden sighted a cryptid on a branch. It had dark hair on the front of its body and the back hair was lighter. The darkest hair on its head fell below the shoulder-blades. Its arms were long; its legs, short. Van Heerwarden didn’t see feet, but saw some normal-looking toes. The face didn’t appear to be simian.

Mr. Oostingh, described his encounter with a strange animal. He saw what looked like a man, sitting on a log. It had short hair and the neck was leathery and dirty. His body was as large as a medium-sized person and he had thick square shoulders.

Oostingh realized it wasn’t a human or an orangutan. He said it resembled a very large gibbon, a member of the ape family, which has longer hair. Both sightings differ from traditional accounts of Orang Pendek.

British researchers Debbie Martyr and Jeremy Holden have been working to photograph the cryptid, beginning in 1990, without success.

Both claim to have seen Orang Pendek on several occasions. They gathered local lore and witnesses’ accounts of the UMA and used cameras to try to get a picture of it. Several others have been involved in the search for irrefutable evidence of the cryptid’s existence, without any that can be proved beyond a doubt.

What Could Orang Pendek Be?

There are theories as to what this UMA might be. They are:

Extra-Terrestrials – Some UFologists believe that hairy bipeds might be aliens or their pets because there are UFO and these cryptids’ sightings at the same time and in the same area.

Mistaken Identity – It’s possible, in some cases, that sun bears, orangutans, gibbons and siamangs, an ape, have been misidentified as Orang Pendeks.

Missing Link – Some theorists suggest the cryptid could be a missing link between humans and apes. It might be surviving Australopithecus, an early, bipedal, hominid ancestor of humans.

Until an Orang Pendek is captured, there is no proof beyond a reasonable doubt that it exists. The evidence consists of many witnesses who have sighted the UMA. Descriptions differ, but it possible there could be more than one breed.

Footprints and hairs have been found. While they haven’t been thoroughly analyzed, they suggest that the Orang Pendek exists.