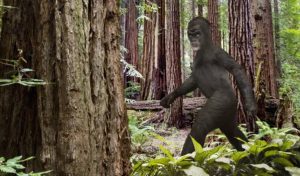 Unidentified Mysterious Animals (UMAs) including hairy humanoids and other ape-man creatures are sighted globally. Descriptions and theories have amazing similarities.

When the first people from the UK arrived in Australia during the 1700s, Aborigines told them about the Yowie, a hairy biped or humanoid, who lived in the forest.

The name was also used for a mythological creature, a giant beast, resembling a lizard/ant crossbreed. The colonists thought the tales were meant to scare them, until a European saw the hairy biped in 1790. Many sightings would follow.

Light or reddish brown, grey, black or hair, about two to five inches in length, covers the Yowies’ body, except for its face which resembles that of an ape or a man without a forehead or chin. They have broad shoulders, no neck and muscular legs like an ape’s.

The Yowies’ estimated weight is 500 to 800 pounds. The Yowies’ long powerful forepaws nearly reach the ankles. Its piercing eyes are large and deep-set.

Their canine teeth are long and protrude over its closed mouth. Some witnesses reported smelling a foul emanating from the creature.

These hairy humanoids are said to be intelligent, curious and omnivorous. They are said to kidnap, kill and eat chickens and other livestock. They have been seen eating fruit, going through people’s trash containers and eating road kill. Most Yowie sightings are of solitary ones, but pairs and families have also been reported.

Yowies prefer to live in forests as evidenced by bizarre structures made of twigs, trails resembling man-made ones and trees woven into forks of others. In more open areas, Yowies stay within the tree line and try to hide behind bushes and trees because they don’t want to be seen.

They emit strange shrills and howls. Allegedly, they make nocturnal rappings on doors and walls of people who built houses in their territory.

What Could the Yowie Be?

Paleontology has a lot of debate and conjecture. Findings that were considered to be facts been changed due to new discoveries. There are theories about the big and small Yowies.

One theory as to why they’re believed to be extinct is that man killed most of them, instilling a fear of humans which drove them further in to the bushy remote areas where they may still survive.

According to Paleontologists, the Gigantopithecus is the likeliest candidate to explain Big Yowie sightings. Fossil evidence implies it could have been up to 12 feet tall, weighed about 1,000 pounds and walked erect. It lived when humans existed on earth.

The most likely candidates for Small Yowie sightings are the Australopithecus Robustus and Homo Habilis. Both lived when humans did. The primary factor that gave Robustus an advantage was its powerful body and skull with gorilla-like ridges

People may wonder if these hairy bipeds exist and how they may have traveled to Australia. The prevailing and most logical theory is that they walked to Australia from Asia on ice bridges that were formed during the ice age.

Another postulation is that they might have drifted there on trees after enormous violent storms.

Many animals, including the coelacanth, mega-mouth shark, Java elephant and the Worcester Buttonquail, declared to be extinct, were “rediscovered” alive and well. Some hidden animals, such as the okapi, resembling zebra/giraffe cross breed, was considered an African myth by Europeans until specimens were captured.

It’s within the realm of possibility that the shy, intelligent Yowies could exist as animals thought to be extinct or as species that have yet to be captured or killed.