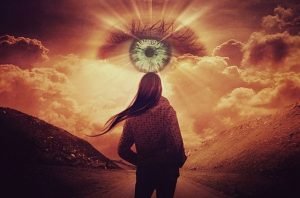 The word Karma is from the Sanskrit language meaning ‘action,’ some translate it as ‘deed’ or ‘fate.’ It was said to have originated in India between two and three hundred years before Buddhism.

The law of Karma states that as we sow, so shall we reap. In other words, everything we think, say and do becomes part of an energy force we send out into the universe, and that energy will then return to us.

Simply put, if you do harm to anybody, harm will come to you. If you give out love, then love comes back. Here are some examples of Karma you may have noticed in your life.

In your workplace have you ever treated someone badly in your effort for promotion, only to find later someone treated you in a similar fashion?

Have you ever been the one to break off a relationship, perhaps not handling it well and your next partner ends the relationship in a like manner?

Did you have a difficult relationship with your parents and now have one with your child?

Have you ever stolen from someone and had something of equal value taken from you?

Have you started your day in an angry mood and noticed how other angry people are attracted to you?

Have you ever felt loving and noticed others were loving in return?

Have you ever noticed when you are in a situation where you are irritated and stressed everything goes wrong? But if you are calm it all turns out right?

If you feel an argument brewing with someone and your both getting more and more worked up, are you not simply giving out anger and getting it back. What if one of you suddenly backs down and refuses to fight, expressing instead love and concern? Chances are they won’t retaliate in anger. Love is a powerful force.

We carry Karma with us

Karma is something that is carried with us, and is the effect of all that we have, thought said and done both in the present and in our past. So its not just how we treat people today but also in our past. Everything remains with us both good and bad, until we look at it and make the choice to change our thoughts and actions.

Karma is the law of cause and effect

Karma contains three elements; the initial thought, the will to put it into action, the union of thought and will which creates action, which in turn creates Karma. If you are carrying around hate, fear, anger or frustration you are only hurting yourself.

Apart from revenge there is no reason to hold on to any of these emotions. Revenge rebounds back on the sender every time. If we make the choice to send out forgiveness, understanding, love and joy the same comes back. What is Karma? It is simply the law of cause and effect.

How Does Karma Work?

There is no single, simple answer as to how karma works because different people have different philosophies when it comes to karma.

Some people believe that as long as you live a good life and do good deeds for other people, goodness will come back to you. Others believe that faith is predestined and what happens in this lifetime is a result of actions from a previous life.

In Buddhism, it is believed that there are different categories of karma. Some of the categories include common karma, which is collective and is shared by a family or people of a nation. Another kind of karma is mutable. This mean if a person does lots of good things, it will help a person’s karmic debt from bad things they have done in the past.

Buddhists don’t believe in predestination and feel that each individual has control over their words and actions, which in turn has an affect on others, since everyone is interlinked.

Some individuals who believe in reincarnation believe that karma is carried over through different lifetimes. In other words, something that happened in a previous lifetime will affect a person in this lifetime. If the karma isn’t resolved in the current lifetime, then the person will have to incarnate again until the karma is worked out.

Can Karma be Changed?

If life reflects back what is put forth, then it would be feasible that karma could be changed. At least this is the belief of some people. The thought is by connecting with spirit and embracing the divine, people can alter their karma. Some believe that one way of doing this is through meditation.

To try to have positive karma, meditation is a way to bring in positive energy and thoughts and send positive energy out to the universe. There are people who find that meditating allows them to go deep into their subconscious and connect God, angels and spirit guides. The belief is that if one connects with the divine, the laws of karma can be broken.

It’s difficult to determine how karma works as there are so many different beliefs associated with this concept. The important thing to remember is that there are consequences to all actions. Karma is considered to be the law of the universe and everything you do will have an affect on someone.

A Spiritual Cleansing After A Bad Relationship

The Seven Major Chakras of the Human Body

The Vacuum Law Of Prosperity