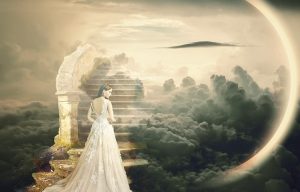 Heaven and Hell are the two after-life destinations of greatest interest to people. What is heaven like? What do Protestant evangelicals have to say about Heaven?

What is heaven like? Where is heaven? What is the size of heaven? Will we know each other in heaven? How do we get to heaven? These are some of the most popular questions pertaining to that mysterious place spoken of in the Bible.

In the book of II Corinthians, the Apostle Paul says that he was caught up into the “third heaven.” Biblical scholars surmise that the first two heavens represent the sky and the universe respectively, with this third heaven being beyond the reach of mortal humanity.

Got Questions Ministries, which describes itself as “Christian, Protestant, conservative, evangelical, fundamental, and non-denominational,” says that the “third heaven,” which Paul visited, “whose location is unrevealed, is the abode of the Triune God.”

Martin Luther once said: “If I am not allowed to laugh in heaven, I don’t want to go there.” Most Christian scholars seem to conclude that Luther should have no concerns, as heaven will be a joyful place.

The Christian Broadcasting Network simply states: “What is heaven like? It is better than anything any human being could ever imagine when he tries to picture the best thing that could ever happen to him. Beyond that, there is not much else we could say!”

However, while Christians generally believe heaven will be a place of joy and no pain, they are extremely vague on any specifics. In fact, there is a wide array of interpretations (some would say “misconceptions”) about the nature of heaven.

Randy Alcorn, author of the bestseller Heaven, explains that many people have a fanciful and very incorrect picture of heaven. “They think of a peaceful passive place, somewhere up in the clouds, where there’s nothing to do but float around,” says Alcorn. “Their notion of Heaven isn’t a real place, but sort of an endless out-of-body experience.”

Anglican Bishop of Durham N.T. Wright says that there are many misconceptions about heaven. It is not a place in the clouds that people will go to immediately upon death. Rather, says Wright, “In the Bible we are told that you die, and enter an intermediate state. St. Paul is very clear that Jesus Christ has been raised from the dead already, but that nobody else has yet.”

Along with Wright, Alcorn says there is an intermediate state where those who have died remain in the presence of the Lord and await the final resurrection of the dead. Heaven is really the destination after that final resurrection. Alcorn explains:

[People mistakenly] imagine we will remain disembodied spirits in the afterlife and that Heaven won’t be a tangible, earthly place. They mistake the intermediate heaven, where we go when we die, for the eternal Heaven, where we’ll live with Christ as resurrected beings on a resurrected Earth, as part of a resurrected culture. Our unbiblical assumption that Heaven won’t be a real, tangible, earthly place blinds us to what Scripture actually says.

In other words, the current heaven – the “third heaven” – is indeed the presence of God, but is an intermediate state to which the souls of the saints go. The “New Heaven,” foretold in Scripture, will be a real, physical place where the souls will be reunited with their physical – albeit glorified – bodies.

How Does One Get to Heaven?

The most important question of all, of course, involves how one gets to heaven.

Jesus tells his disciples in John 14 that he “is the Way, the Truth, and the Life” and that “no one comes to the Father, except through me” (John 14:6). The Apostle Paul writes that one must “confess” Jesus Christ in order to “be saved” (Romans 10:9-10).

Conservative evangelicals conclude, based on these and many other verses, that Jesus Christ is the means by which people enter heaven. Outside of Christ, there is no salvation. Along these lines, John MacArthur, in his interview with Larry King, declared that one’s “personal relationship with Jesus Christ is, according to the Bible, the only way to enter heaven.”

Other professing Christians take a more open and permissive stance, arguing that God is merciful and will accept many into heaven outside of any such litmus test.

Even some moderate evangelicals like Joel Osteen and Billy Graham have, in recent years, seemed to gravitate toward this perspective. While there is little biblical support for this position, it has wide emotional and social appeal.

Heaven will likely remain a subject of intense interest for many people. And from an evangelical perspective, the best source of information on heaven remains the Bible.