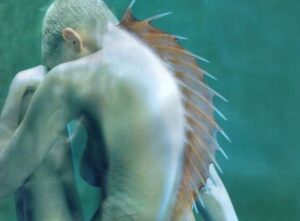 Scottish geologist Dougal Dixon published a book called Man After Man: An Anthropology of the Future. This speculative work aims to provide examples of future human evolution. As a fair warning, we should specify that the images might prove offensive as they’ve already managed to cause quite a stir when the book was published.

According to the narrative, the humans of the near future started exploring the possibilities of genetic engineering. In a period of 200 years they managed to create several species showcasing extremely weird adaptations that humans had never possessed before.

They did so because they needed to gather what resources were left on an increasingly polluted Earth that was slowly becoming uninhabitable. Humanity was preparing to leave its home planet and they needed adapted workers in order to prepare their departure.

One such product of genetic morphing is what the author calls the aquamorph or Homo aquaticus. This version of modified human has a streamlined body, gills placed on its chest and an insulated blubber layer. It has smooth skin with a low drag factor and its legs now sport paddle-like attachments. 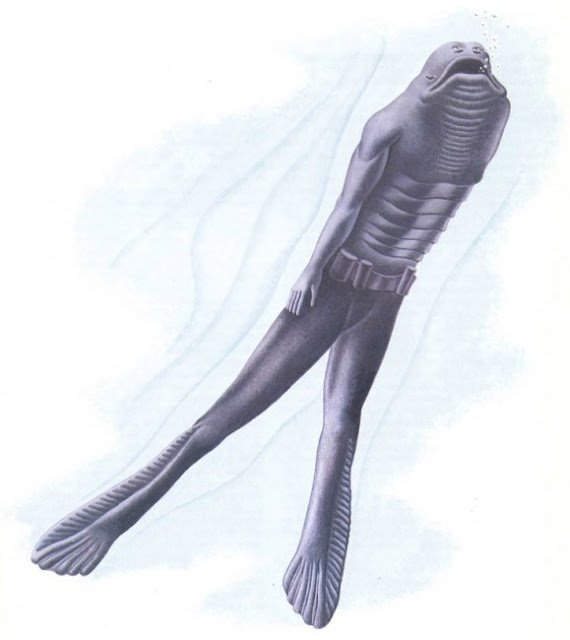 Another example is Homo caelestis or the vacuumorph. If you thought aquatic humans were far-fetched, you’ll be pleased to hear that the vacumorphs were engineered to survive in outer space. Their anatomy consists of a basic body structure on top of which special organs were grafted.

Vacuumorphs have a thick radiation-proof skin and tinted eyes to protect them from the sun rays. However, they are only lab-produced and thus sterile. Also, they only survive in zero-gravity.

They are the crowning achievement of human genetic engineering and are the main workforce building the spacecrafts needed to colonize space. And then things take a turn for the worse. 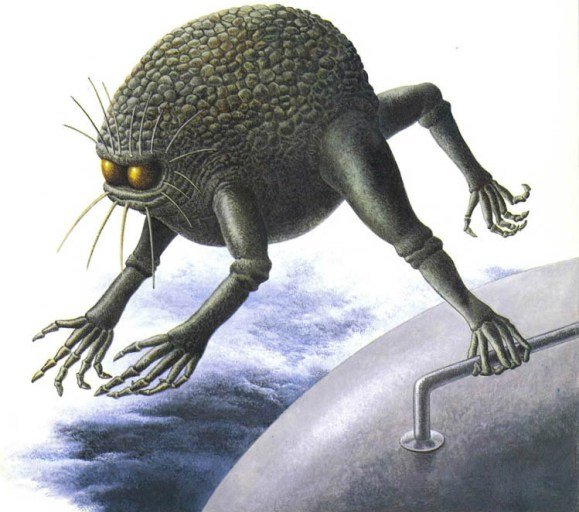 Civilization collapses and only a handful of humans (non-modified ones) are able to escape into the far reaches of outer space. A new species called hiteks or Homo sapiens machinadiumentum arises. They are totally technology-dependent beings, cyborgs if you will.

They continue to engineer new human species and produce several species better adapted to the changing environment. Humanity then regresses to an agricultural society and eventually becomes extinct following a magnetic pole reversal. The remaining human species go on to evolve and fill up the now vacant ecological niches.

Initially, the hiteks created four variations on the Homo sapiens sapiens, engineering them to possess lower intellect, thus ensuring that they would not go on to evolve into a technological society and bring environmental collapse once again. They were also immune to pathogens and poisons.

With time, these four species would evolve into totally different species in order to survive the planet’s changing environment.

Among the most interesting form were the Memory People – Homo mensproavodorum, creatures that would inherit memories from their ancestors. They would re-evolve intelligence and start building rudimentary tools. 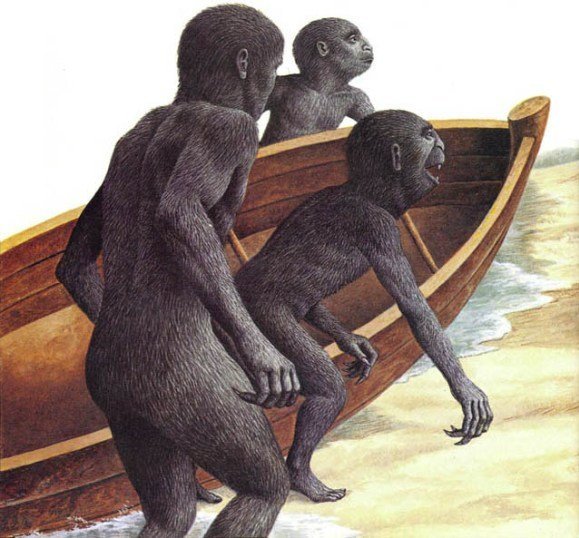 Two of the initial forms would go on to create a symbiotic relationship born out of necessity and governed by telepathic link. 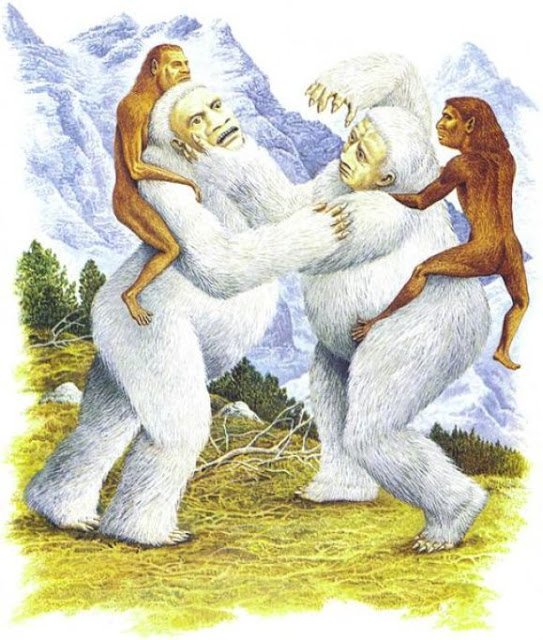 Even weirder, two species would develop a parasitic relationship. Descendants of the Tundra Dwellers were engineered to produce insulating fat layers and their metabolisms dictated that they consumed plant matter continuously.

When the planet’s climate warmed and tundras gave way to deserts, they lost their fur but retained their appetite. They had very low intelligence and became easy targets for distant relatives of the Woodland Dwellers that had evolved into anthropomorphic ticks.

Two million years after the initial events of the book, things look very strange on planet Earth. Hivers have now established desert colonies inhabited by shared-minded individuals. They live in hives and have a hierarchy similar to a termite or ant colony. They also employ Seekers, humanoids that have lost most of their senses, except for the life-saving ability to detect water in the harsh desert. 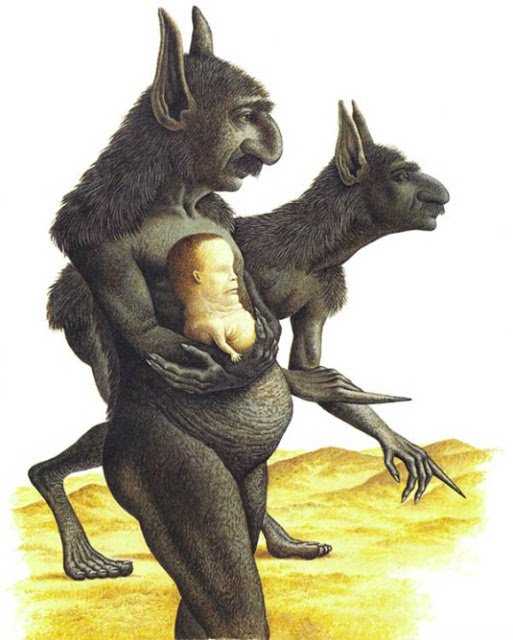 Other species inhabit the colder regions, hibernating for most of their lives and establishing rudimentary agriculture during their awake period. Another weird life form is the gremlin-like Desert-Runner, a highly specialized creature. It runs over the desert on its elongated legs and cools itself by pumping blood to its huge ears. It has excellent vision although it does not detect color. 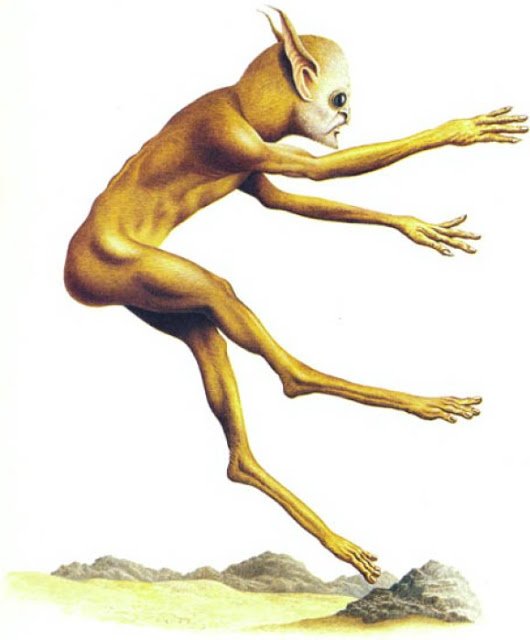 Five million years have passed since the humans left and now strange spaceships are starting to land on the Earth. The weird creatures that they carry are the descendants of the first humans, now changed beyond recognition.

The author tells us that they have continuously used genetic engineering in order to adapt themselves to the environments of the alien planets they have since inhabited.

They enslave the population to suit their needs and in a period of just a few centuries transform it into a barren wasteland, devoid of any multicellular life forms, save for the few survivors on the bottom of the oceans, fed by the bacterial colonies that have been living off hydrothermal vents for billions of years. Maybe these will go on to evolve into sentient beings once again…

Although speculative, this book relies on solid scientific zoological and evolutionary principles and does make for an interesting read. Regardless of seeming far-fetched, this scenario is by no means impossible in the future.

It contains several technological, social and biological concepts, most prominently genetic engineering but also parasitism, slavery, and elective surgery. As a result of mankind’s technological prowess, evolution is accelerated, producing several species with varying intraspecific relations, many of them unrecognizable as humans.

Eventually, modern humanity dies out and technology disappears. With subsequent human species having been engineered to be unintelligent and animal-like in order to repopulate the Earth’s ecosystems, concepts like culture and civilization disappear and the lives of most human descendants revolve around gathering food and surviving the harsh conditions of nature.