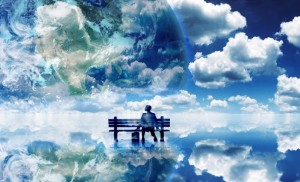 Nurse Penny Sartori was barely half way through her night shift when the patient was apparently visited by the spirit of his dead sister.

Peter then began staring intently at a ghostly figure at the foot of his bed – a figure only he could see – and then started talking to it.

“He suddenly regained his energy,” says Dr Sartori. “He seemed to be having a conversation with someone we could not see. After a while, a beautiful peaceful smile crossed his face and he relaxed completely.”

“When his family arrived he told them that he’d been visited by his sister in the night and that they’d had a long chat.

“The strange thing was, his sister had died the week before and nobody had dared tell him because they thought the shock might kill him. There was absolutely no way he could have known about his sister’s death.”

It was in that moment, says Dr Sartori, that she realised Peter was going to die, no matter how much medical attention he received.

“When a patient says that they have been visited by a dead loved one you know that their time has come. It’s commonly accepted by nurses and we see it quite a lot. Nurses will tell each other that ‘he’s just had a visit’ so he’ll be off soon.”

Such ‘deathbed phenomena’, of the type experienced by Mr Holland, are surprisingly common. According to recent research at King’s College London, around ten percent of the terminally ill or their loved ones report some kind of mysterious inexplicable event that hints at an afterlife. Patients may report visits from deceased loved ones or perhaps catch a brief glimpse of a heavenly realm.

Whilst they are undoubtedly comforting for the dying and their loved ones, do such deathbed phenomena really shed light on the vexed question of whether there is life after death? Over the past few years, scientists have begun studying such phenomena and have concluded that the dying may indeed be visited by the spirits of their deceased loved ones.

Dr Peter Fenwick, a neuropsychiatrist at King’s College London, who leads the research team investigating the phenomena, says: “One possible interpretation of the data is that there really is life after death whilst another would be that something paranormal, such as ESP, is behind them.

“Deathbed phenomena come in three forms. The dying can receive visits from dead loved ones or they may have visions of lights and other worlds. They may also experience strange coincidences such as receiving a visit from a relative they did not know had died.

“Those around them may also experience inexplicable events such as clocks stopping or strange lights appearing around the patient. Others have seen a translucent shape leave the body at the time of death.

“You don’t need a religion or a belief system to ‘believe’ in these phenomena you just have to look at the data and make up your own mind,” says Dr Fenwick.

It’s easy to dismiss cases like that of Peter Holland. Sceptics argue that they result from a heady cocktail of faulty memories, powerful painkillers and the desire to believe in an afterlife at an intolerably stressful time.

“Such stories are the result of hallucinations, wishful thinking or coincidence,” he says. “There is no evidence for God or life after death. I have no doubt that it must be reassuring for those who believe in these things. On the whole, religious people do tend to be happier. I would love to be religious and think that there was a heaven but it simply doesn’t exist.”

Although sceptics can reasonably challenge many deathbed phenomena, there remains a hardcore that simply cannot be explained by any conventional means. And it is these that Professor Fenwick’s team is studying intently. And strange as it may seem, Peter Holland’s case is far from unique.

Linda Jacobs’ experience is typical. Her father was terminally ill in a Manchester hospital. His mother-in-law had died unexpectedly and the family decided to spare him the unhappy news. As the family gathered round his bedside for what they believed was his last night, he became increasingly alert.

“He kept saying ‘move out of that smoke,” says Linda. “He then began smiling and laughing as though he was meeting with people we could not see. He then turned and looked at my mother and said ‘your Mum is here! What on earth is she doing here?”

Moments later he died – with a smile on his face.

Linda is adamant that her father did not know that his mother-in-law was dead. The whole family had agreed not to tell him. If this is the case – and there’s no reason to doubt her honesty – what can account for such mysterious events? Whilst many would choose to dismiss such stories, Linda is convinced that it provides evidence for an afterlife.

Although visions of a heavenly realm cannot be independently verified, other equally strange phenomena are reported by relatives as their loved one dies.

“Clocks can stop,” says Dr Fenwick. “One lady told me that all of the clocks in her house stopped working at the time of her husband’s death. They started again a week later.” Although one timepiece stopping at the exact moment of death can safely be dismissed as coincidence, can you so discard several failing at the same time – and in the same house? And how can you account for them all restarting at the same time seven days later?

It’s not just timepieces that seem to be affected by the death of a loved one. Anecdotal evidence suggests that mobile phones, video recorders, and TVs can all mysteriously cease to function only to resurrect themselves shortly after. Devices particularly loved and cared for by the deceased are particularly likely to malfunction at the moment of their death. It’s not just man-made devices that suffer. Pets can mysteriously fall ill or even die.

Translucent amorphous shapes can occasionally be seen leaving the body. An acquaintance of Professor Fenwick’s, a GP from New Zealand, went to the aid of a golfer who had just had a heart attack.

“As he was going to help, he saw what he described as a white form which seemed to rise and separate from the body,” he says.

And just as the dying are visited by deceased loved ones, the recently departed seem capable of visiting the living within moments of their death. The case of Kate Batchelor, a sheep farmer in the western isles of Scotland, has puzzled researchers for many years. Her brother was ill in hospital but was expected to live. When he died a friend was despatched to tell her the awful news. When they reached the farmhouse they were greeted by Kate.

‘I know why you’ve come,” she said. “I heard him calling me. He was saying ‘Kate, Kate’ as he passed over.”

The time of death noted by Kate was exactly the same as that recorded by the hospital.

Mysterious lights appearing at the time of death have been reported by onlookers. It may sound like a Hollywood cliché but shards of light bursting out from the chest of a loved one at the precise moment of death have genuinely been seen.

Diane Smyth, from Harlow in Essex, recalls the time she sat with her elderly father as he died. As she awoke in a darkened room, she noticed something strange hovering above her father. As her eyes focused on the mysterious shape she couldn’t help but notice “a flame licking the top of the wall against the ceiling.”

“I saw a plume of smoke rising, like the vapour from a snuffed-out candle,” she says. “It was being thrown off by a single blade of phosphorous light and was indescribably beautiful. It seemed to express perfect love and peace.

“I eventually switched on the room light. The mysterious light vanished and the room was the same as always on a November morning, cold and cheerless, with no sound of breathing from Dad’s bed. His body was still warm’.

DrFenwick hopes his research will help us come to terms with the process of dying and of death. He plans to produce a textbook for doctors and nurses caring for the terminally ill. It will be the 21st century equivalent of the Ars Moriendi, the fifteenth century classic on the “art of dying”, which described how best to prepare for death.

“Death is not a frightening process,” Dr Fenwick. “In fact, it seems to be well catered for Dr Fenwick has become convinced that deathbed phenomena serve to prepare us spiritually for death. It’s a process that can take several days and gathers increasing pace as the hours pass.

So what exactly happens in the final hours of life? A common thread runs through many of Dr Fenwick’s case studies and he has now been able to build up a tentative picture of what he believes happens. Often the first thing you experience is the realisation that there are friendly spirits in the room who arrive with the express purpose of carrying you to another realm. As you become more aware of their presence, fear turns to happiness and eventually bliss.

These spirits will often sit for hours comforting you as your body progressively shuts down and dies. It is only when you are happy, relaxed and resigned to your fate that the process of reviewing your life – including all of its failings – that you can begin resolving all of your conflicts. Resolving conflicts with friends and loved ones are particularly important. Tying up all of life’s loose ends appears to be central to a good death. It would appear that when this process is complete then death quickly follows. It’s almost as if in the final moment of peace, the body finally offers up the ghost.

Presumably what happens next is something akin to a near-death experience. This, you may recall, occurs when a person dies, often from a cardiac arrest, and their soul appears to leave their body and travel towards heaven through a long dark tunnel. Those who have returned from such a journey report a world full of peace and plenty, love and respect, and of infinite knowledge and wisdom.

This is all well and good but what happens if you should meet a sudden unexpected death? Obviously no one knows the answer, so perhaps it’s best to heed Dr Fenwick’s advice: “You should be ready to die at a moment’s notice. Those with a clear conscience die well. Those who are angry or frustrated have a much more difficult death.”

Note: Some names in this article have been changed to preserve medical confidentiality.