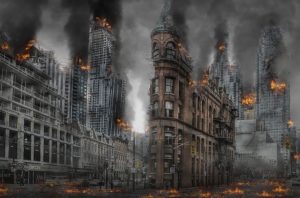 Many religions and traditions around the world believe in a time when everything will end. Learn what different cultures say about the end of times.

The word apocalypse means revelation and it is often associated with the end of the world as Christians believe that it refers to the end of an era in which the good will be separated from the evil eternally and those who lived accordingly to the sacred teachings will be sent to heaven after being resurrected.

However, the whole concept of a “final judgement” followed by the end of an era comes from ancient religions that date back to thousands of years before the Bible, as eastern traditions have an older version of the apocalypse that share a common symbolism even though the cultural elements appear differently.

Examining the similarities between different religions about the end of times may provide interesting clues about the meaning of the symbolic language used in all sacred books of humanity.

The End of an Era According to Eastern Religions

According to Hinduism as well as Buddhism, planets are considered living beings that exist for a certain period of time (some millions of years) until they grow old and die.

When it’s time for a planet to end, astronomical catastrophes of all kinds happen and its inhabitants, those who are alive and those who are not, experience a process of “judgement” in which the destination of every soul is defined.

This process, however, is said to be a natural cycle of the universe and happens to every single planet periodically as a way to renew forces and evolve, as Hindu belief holds that everything in nature – from cells to galaxies – evolve through a continuous process of death and rebirth, becoming better at every new life.

As reincarnationists, Hindus believe that the end of the Earth represents the end of an era in which humans, after incarnating many times on Earth, only have two possible destinations: if they have learned the lessons that all people are supposed to learn during the human experience, such as compassion, generosity, wisdom, justice, etc; then they will move forward to another planet to develop other faculties (which corresponds to the “rapture” in Christianity).

However, those who failed to learn, will repeat the human experience and reborn among primitive beings that are just starting human life from the very beginning of the evolutive cycle.

This is consistent, in symbolic terms, with John saying that every person must be purified before the apocalypse. It also consistent with the passage of the Bible which says that at some stage of the apocalyptic process, human blood will be mixed with animal blood.

This is also depicted in the symbolic process of the end of the cycle according to Hinduism, in which those who haven’t learned the human lesson will be reborn among primitives, in a process that has happened many times before and will continue to happen eternally at the end of every new cycle.

The Meaning and Symbolism of the Seven Seals of the Apocalypse

The number seven is present in nearly all major religions of the world and it hides an important symbolism. Christianity refers to seven churches of apocalypse, seven angels, seven messages, seven seals, seven trumpets, seven bowls and seven spirits of God. Also, according to the Bible, the world was created in seven days.

According to eastern traditions there are seven levels of consciousness in which humans (and also the universe) go through in order to evolve.

These seven levels represent the steps that people must take in order to reach perfection and they also represent the seven cycles that the universe go through eternally, always returning to the first point at the end of every seventh cycle.

So, eastern religions believe that there have been many apocalypses and there will be many, because this is the natural movement of the universe.

Is The World Going to End?

In symbolic terms, all religions tell the same story only with different cultural elements. There’s no religion better than the other if the events depicted in the sacred books of humanity are understood in their symbolic meaning and not regarded as historical facts.

The end of the world in every belief system corresponds to the end of a cycle, bringing opportunities of spiritual growth.