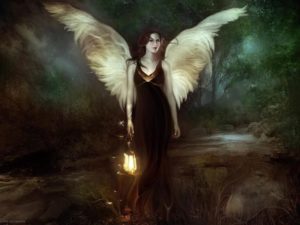 Many people believe in angels but only a few know that the concept of enlightened beings that help and protect people is present in many different religions.

Sometimes depicted as beautiful creatures with wings, other times as friends from previous incarnations and others just as humans that reached a higher state of consciousness, these wonderful friends from the spiritual world have inspired artists and great thinkers.

Christian belief in angels is based on the Biblical scriptures and have various interpretations. It is commonly accepted among Christians, that there are three kinds of angels which are subdivided into ten orders, each one of them is responsible for specific tasks.

There are good and bad angels as well as fallen angels – those that rebelled against God and were exiled from heaven. Angels can protect people, send God’s messages and live in God’s presence like the Cherubs.

They appear in the Bible as creatures with wings and a manly body, although the artists, specially those that lived during the Renaissance, depicted angels as babies as a way to symbolize purity and innocence.

According to the Quran, angels are obedient creatures that serve Allah and that cannot be seen or heard by people, although they can be felt sometimes.

They are made of light, created by God before humanity, and belong to the world of the Unseen, like the jinns and other entities. There’s a hierarchy of angels in which each of them have a specific task to perform.

Each person has two angels that follow him, writing everything that is done, thought and felt by their protected one in order to register their good and bad behaviors. These are the writing angels and can be also called guardian angels.

The Quran also mentions the hell keepers, nineteen angels that open the gates of hell under the orders of the angel Malik. According to Muslims, people reach hell in groups, and those who do not believe in the words of Allah will stay in hell.

The Devas in Hinduism and Buddhism

Eastern reincarnationist religions such as Hinduism and Buddhism believe in creatures that are superior to humans and inhabit places in higher realms. These creatures are called devas.

Like Christians and Muslims, Buddhists and Hindus believe that these creatures are divided into three categories and subdivided into many others, having specific tasks to perform, like the lipikas – beings that register all thoughts, intentions and feelings of people.

The main difference between the eastern and the western concept of angels is the fact that for Hindus and Buddhists, the devas are beings in evolution, having passed through many incarnations as humans before they reached the state of consciousness that allowed them to become “angels”. So, every human being has potential to become angel after many incarnations.

Although the devas are superior to humans, they are not perfect and those who belong to the lower level in the hierarchy are subjected to mistakes and wrong choices, just like a person.

They inhabit the astral sphere and can interact to humans in the afterlife. Since eastern philosophy holds that hell and heaven refer to a state of mind and a level of consciousness rather than a place, there can be devas interacting with humans in low levels of consciousness, in spots that Christians and Muslims would call hell.

So the Muslim idea of the hell keepers is consistent with some Hindu and Buddhist concepts.

The superior devas take care of plants, animals and nature in general. They can be seen and heard by people who have developed psychic abilities and interact with humans in the afterlife in higher levels of consciousness. Devas are not immortal, they also die and reincarnate, but their lives are much longer.

Spiritism and Angels or Spiritual Guides

Western reincarnationist religions such as Spiritism hold that there are enlightened spirits who help others by inspiring them, making mental suggestions and protecting them.

These are beings that once lived as humans but after many incarnations they reached such a high level of consciousness that they can help and inspire those living in the physical world. They are also subjected to reincarnation in order to evolve even after they become protectors.

Like Hinduism and Buddhism, Spiritism holds that heaven and hell are just a transitory state of mind created by illusion and therefore, the enlightened beings sometimes rescue those that are experiencing a painful afterlife due to feelings of guilt and despair.

Sometimes these beings can be spirits that have lived together with those they protect in previous lives, and therefore, they are very fond of the ones they help. Spiritists do not use the word “angel”, rather, they call them “spiritual guides”.

The differences between religions regarding angels are only superficial as the main idea behind them is the very same in all belief systems. Shapes and names change, the essence does not.

What does this mean? This means that all creeds refer to the same reality, only with different cultural elements.

Every Country Has Its Own Bigfoot: The Wildman of China