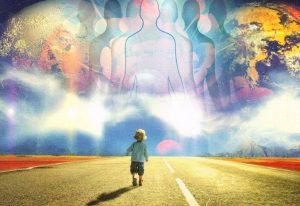 Past life memories have confounded the scientific community because no one has been able to verify its source. Three possible explanations provide an evolving perspective of the phenomenon.

They are not mutually exclusive; in fact, the first two explanations can be incorporated into last one—the idea of holographic recall.

Past Life Memories as Cryptamnesia

Skeptics are quick to point out that past life memories are due to cryptamnesia, the unconscious recollection of reading material which spontaneously surfaces to consciousness as memories.

Close examination, they claim, shows that past life memories prove to be details from forgotten books or movies. One case of cryptamnesia involved a 19 year old girl who detailed descriptions of a Nazi raid in Finland.

Under hypnosis, she revealed the source of her knowledge—a book she had read years earlier but had forgotten.

Past Life Memories as Reincarnation

Cryptamnesia is evidence of a left brain assessment of psychic phenomenon. Belief in the afterlife and reincarnation often comes from a mystical experience of universal consciousness, a phenomenon that is mainly a right-brain activity.

One such example is Dr. Frank Oski, a Professor of Pediatrics at Johns Hopkins University who felt powerless before children born with congenital defects, children he could not help.

One night, he had a paranormal visit from an angel who explained to him that children had to die because life was an endless cycle of improvements that everyone, including children, participates in.

She also reassured him that even handicapped children with congenital defects can teach humanity the lesson of unconditional love—loving those who came to this earth less than perfect.

Past Life Memories as Holographic Recall

A third explanation of past life memories comes from Dr. John Archibald Wheeler, a Princeton physicist, who believes that memories are stored in the patterns of life. Memories of past lives probably come from a universal memory source that lies outside the human body.

Children who have returned from near-death experiences report the existence of a “timeless, all-knowing space through which [man] has access to memory or mystical insights”(60). New scientific studies of quantum holography suggest that the human body is a hologram within a holographic universe. A hologram is a part that contains the information of the whole.

The idea of holographic recall is relatively new; it points to the vast resource of universal consciousness that modern man is just beginning to access with his scientific mind.

Mystical visions like Dr John Oski’s belong to the right temporal lobe. They cannot be scientifically validated and can only be absorbed with an open heart and mind. Skeptics who see all past life memories as cryptamnesia engage only the left temporal lobe of reason and logic.

Use of the hologram to explain the possibility of mystical experiences completes the picture. Taken together, all three explanations provide a whole brain approach to past life memories.

Angel Signs: How To Know You’ve Been Visited By An Angel

What happens if all oxygen disappears on Earth for 1 minute